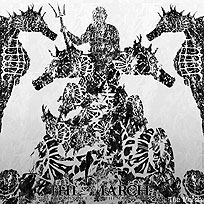 Yes, France. Most don't think that there are any kind of low churning bands of the open-chord nature in the land of the Louvre -- but the bands are there. "You have to dig to find them," vocalist Oliver Haese of the March told Noisecreep. "There definitely are original and great bands which have their own identity and which make the national scene evolve. But still, most of the time there are copies -- maybe we are -- of what was done before in the U.S. or in the U.K., and so it goes round in circles."

According to bassist Sébastien Costes, there are many clones of the hardcore tough guy stuff going on currently. "The sludge scene in general gets more important, even though it doesn't grow very much," he said.

The March formed from an ad placed by Costes where bands like Will Haven and Cult of Luna were cited as targets for sound. But, of course, things changed and metamorphosed into something all their own. "When we met, we didn't talk about playing any particular kind of music, like, 'Yeah we're going to play like this band,'" said Costes. Haese added, "But we obviously had bands in common that we've enjoyed, and so they were our influences."

With their first release, 'Dead Ends and Blind Spots,' out, the band has been getting deserved praise, with people hailing them as a band to watch based. But still, they have a problem playing in France. It's illegal to get loud.

In France, the bars are forced to follow the rules of an anti-noise regulation. "It's a pain in the ass! It's like if you asked a hairdresser to make a haircut without scissors, so he would use a lawn mower and the result would be ugly. It's the same for the music," admitted Costes. "The problem of the decibel machine is true mainly for these bands. This is ridiculous. This is the law that's been imposed to the bars in France. A drummer hits its drum set between around 102 decibels and 116 decibels, or even more. The machines are locked at 96 decibels. It's very problematic. The bar owners try to get the law respected, otherwise they get a big fine. In the end, this is artistic frustration, it's impossible for a rock band in general to have fun on stage."

In no way is any of this the choice of the bars. This actual issue has had people calling Paris the city of sleep as the nightlife itself has become quiet over the years due to laws like this. "I believe that bars are run by involved people, dreamers, but unfortunately their places are not adapted and built at all for concerts but thanks to them the culture moves forward and the music is played anyway," Costes adds.

Both members of the March resounded that they don't see the government changing the rules anytime soon. "French people enjoy listening to Mariah Carey. I'm generalizing, but rock culture has never really succeed to establish itself in France until now."

Filed Under: cult of luna, CultOfLuna, march, will haven, WillHaven
Categories: Interviews
Comments
Leave A Comment
Back To Top