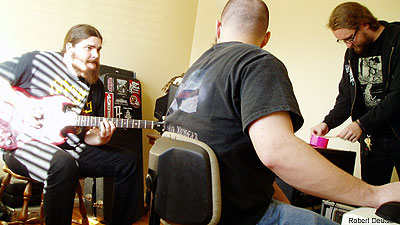 The Funeral Pyre has always done it their own way, and recording for the band's forthcoming full-length isn't that much different. Yeah, they have a record label, and sure, they just did a six-week tour -- that they booked themselves -- across the U.S. last fall, but in between three LPs, a handful of splits and almost 10 years in the trade of dealing deathy black metal, the band seems to have realized that sometimes it's best to keep it all in house.

Bassist Adam Campbell is at the helm at Awkward Studios for all the tracking for their new album -- which is whenever the band is available -- throughout February, and mixing will take place at Arcane Digital at the hands of Ryan Butler. The Landmine Marathon guitarist will twiddle the knobs for the yet-untitled record, which is penciled in for release sometime early this summer via Prosthetic Records. The details aren't nailed down just yet, but the band isn't overly worried about that just yet, let alone doing things themselves, despite the backing of a label.

"Surprisingly, tracking our own record has been the most productive thing this band has ever done," the Funeral Pyre vocalist John Strachan tells Noisecreep. "We had to sit down and force ourselves to be our own judges. Being in a band can definitely become complacent. With this process," he continues, "we felt like we had to create a record that we were proud of, because we're doing most of the work, aside from our friend [Butler], who will mix it."

For so many bands preaching the do-it-yourself mentality and the concepts of friendship and brotherhood, the Funeral Pyre actually practices what they preach. "I honestly don't feel that there are a lot of bands who really do practice the DIY mentality," Strachan continued telling Noisecreep. "Even us ... I mean, we let a record label put out our record, rather than doing it ourselves. OK, but as far as touring, we're not ones to wait around for our big break and have the audacity to actually believe that we're going to get on a good, big tour or anything. That type of thinking is for the birds."

"Instead, we decide to route our tours, book them, and then hit the road so that way we can live out what dream we have left of music," Strachan said. "The thing is, right now - this band has become about negativity and fun. You can't be a rock star. Being in a magazine, having features, that stuff means f--- all. Playing in a kid's basement, hanging out with them, drinking all their booze. That's what this is about," he laughed. "Well, to us anyway. But what the f--- do we know, right?"

The Funeral Pyre will release their new album sometime this summer, and Noisecreep will let you know the details first. Slated for the final mix are nine tracks out of 11 recorded at Awkward Studios.