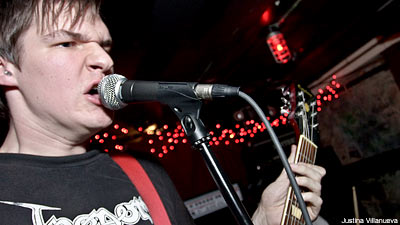 When you look at the Mammoth Grinder MySpace page (as you will directly after reading this whole post), you'll notice is that it's at its barest, with minimal information about the band. They have an LP. They have a seven-inch. And, if you want any more information, they have an e-mail. When the Austin-based band played The Charleston on Jan. 12, their set was just as bare at 16 minutes 10 ten seconds. But that didn't take away from their force and conviction. Even after playing less than 20 minutes, this Noisecreep writer was still too tired to catch up with the band. So instead Noisecreep sent frontman Chris Ulsh some questions via e-mail.

You can also catch Mammoth Grinder at Austin, Texas' Chaos in Tejas with Rorshach, Bastard Noise, Subhumans, Bone Awl, Iron Lung and many more rad bands. However, the fest happens May 27 to May 30 -- which is the same weekened as Maryland Deathfest. Good luck trying to divide your body into half Austin, half Maryland.

Are you guys traveling with a new bassist?

Yeah, I think we have had a different bass player the last three times we came through [New York]. Right now our buddy James [Hammontree] from Oklahoma is holdin' it down on the bass and it's been working out pretty well.

Why such a short set?

I dunno really. Shorter is better, I think. It just feels right. Better to leave people wanting more than to overstay our welcome, you know? I just think there is something cool about driving forever and setting up a wall of cabs only to play for 15 minutes. We're idiots.

What do you enjoy about playing shows in New York? Or are they barely enjoyable?

They are extremely enjoyable. We always come into town as early as possible and stay as late as we can. One of our best friends from Austin moved up there, and the label that put out our last seven-inch is based out of Brooklyn. So we always make sure we have time to see everyone and eat at all the good spots. We also make sure to get as many parking tickets as possible.

What do you guys consider the "good spots" for food?

We tried a pizza place called Vinnie's last time. That was crazy, and I really like that one french fry place with all of the different sauces but I forget what it's called. We go there almost every time. It seems like a real hot spot. Brian (our drummer) knows all of these famous spots from watching the food network, so tour is a great excuse to try all the best food.

Are there any local or unsigned bands you like playing shows with?

Of course, in Texas we're always playing with our boys Power Trip, Iron Age, Hatred Surge -- I'll never get tired of watching those bands and we always have a good time. Last night we played with a new-ish band in Austin called You People that's members of some other other Austin greats, it was my first time seeing them, and they smoke. Outside of Texas our favorites to play with are probably Legion or Mind Eraser, any time those guys are in the picture you know you're in for a real treat.

What is your best or worst tour story?

We have this problem where we forget to look at the gas gauge, and then we run out of gas in the most inconvenient places but I usually just think stuff like that is funny. My favorite moment in recent memory is when our roadie saw a homeless person with a sign that said 'hard times' and [our roadie] yelled "CROMAGS!" at him. He was on all kinds of fire that day. Oh man.

Are you working on the follow-up to 'Extinction' yet?

We actually recorded two songs while we were in Boston a couple days after playing [New York]. One was for a Rorschach tribute compilation we got asked to be on. So we did a cover of 'In the Year of Our Lord.' The other is a new song we came up with a couple days before we left, but I'm not sure what our plans are for it quite yet. They came out really good, we're excited to unleash them upon the world.

When and who asked you to be on the comp? How stoked were you?

Chainsaw Safety out of N.Y. is doing it and Charles from Rorschach has a hand in it, too. Chainsaw's been around for a while and put out lots of good stuff. So I was excited to see that they contacted us. Then when I read they wanted us to record a Rorschach song, I was beyond stoked. They asked which song we wanted to do and 'In the Year of our Lord' was our first pick, so that was really cool as well. Since we recorded it in the middle of tour, we played it every night just to make sure it was as tight as possible, and that was a blast. They are playing Chaos in Tejas, which we managed to jump on this summer, too. I think I'm going to try to break my neck when they play. It's a mind-boggling lineup. We'll see ...