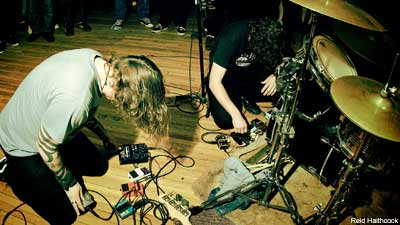 Canadian powerviolence purveyors the Endless Blockade are a busy bunch. They have a split with Bastard Noise out via 20 Buck Spin/Deep Six, a forthcoming split with Unearthly Trance, a discography CD on the way, a death metal side project called Slaughter Strike and several live shows booked including an appearance at SXSW. How do they do it? Noisecreep spoke with bassist/vocalist Andrew Nolan to find out.

"I perceive the bands and noise projects I'm involved with to be manifestations of different aspects of my internal life, so it's not something I have to think too hard about. It's just something I do, [just as] some people play sports or go to church," Nolan told Noisecreep.

"It doesn't and won't ever pay the bills," Nolan continued. "In fact, it pays the bills less and less, and consequently we tour a lot less now, only really playing when we have a new record to sell." Like many artists, Nolan separates his band's art from the necessity to earn a living. For Nolan, he'd rather play the music he loves than treat music as a job. "I can't conceive of the reality of playing in one of those minimum-wage death metal bands that tours non-stop and gets permanently screwed by their mid-level label," he said.

As for the split with Unearthly Trance? "They contacted us because they liked [our record] 'Primitive' and identified with some of the symbolism in the packaging and lyrics," explained Nolan. "There's a significant dovetailing of certain aspects of belief and intent between Blockade and Unearthly Trance, so we're very happy to be doing a split with them." The Endless Blockade contributed eight songs and a Slogun cover to the 12-inch, which ought to see the light of day in early spring.

The band also has a discography CD in the works, which will be released by the band's home label, 20 Buck Spin. We asked them why a band that's been around for less than a decade would need a discography release, and Nolan's answer was enlightening. "The first of three Blockade demos came out in 2003. Since then, I think we've released two LPs, one seven-inch, two split seven-inches, four split LPs and have another split LP and split seven-inch currently unreleased. Oh, and some comp appearances, too. [But] only the two full-lengths and the Bastard Noise split came out on CD and [20 Buck Spin owner] Dave Adelson has convinced me that people do still buy CDs -- I can't say we care for the format -- so we've agreed to collect all our non-CD appearances into one -- or possibly two -- convenient silver beer coasters."