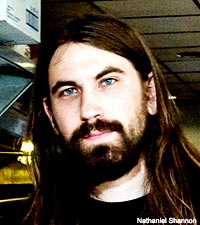 Ryan Knight from The Black Dahlia Murder is currently on the road with the Rockstar Mayhem Fest. He's chimed in from the early days on the road, and now here's even more 'metal minutia' for you.

Day Six
Today we have to drive from Seattle, Wash. to Phoenix Calif. What a long, boring, tedious, ball of suck this will be. I mean, at least we have a driver, but spending 18+ hours in any moving vehicle sucks after awhile. Usually on days like this it's good to have a video game or bag of weed in hand to pass the time. We have both!

Day Seven, Phoenix, Ariz.
I knew it was gonna be hot today, but not this hot. I was told the temperature capped out somewhere around 116 degrees. We were plagued with technical difficulties today. Someone saved over our setting on the digital console and Bart (Williams) bass was out for the first couple of songs. Nevertheless, we brought the thrash!

The stage we played on was positioned ever so nicely so that the sun was beating down on us with no shade in sight. We took the stage and I immediately watered my hair down as this helps to keep you cool from the start. The stage was so hot that my feet were literally burning through my shoes. Insane s---. Oh well, at least it wasn't humid. By the time the sun went down it was still around 100 degrees. I ended up going to the bar, getting wasted, and accidentally spending $42 on three shots. Beers on this tour are $9-11 dollars for a Budweiser. Lameness ensues.

Day Eight, Albuquerque, N.M.
Well, what do you know? Another show in the desert. Woohoo! Today's temperature was worlds better than Phoenix, Ariz. I can deal with 90 degrees and a breeze any day. The crowd today was good, and very appreciative. The amphitheatre we played was on a hill that overlooked the city. Pretty nice. There was a storm in the distance, and you could see lighting coming through the clouds as the sun was setting. Coooool s---. Tomorrow is Denver, so cooler times ahead!

Day Nine, Denver, Colo.
I love Denver. It's a mile high, the weather is usually good, people are friendly and shows are usually pretty killer. Our friends in Cephalic Carnage came out today, and with them they brought a keg and Scorpions shirts. Killer! I was wondering if Maris the Great (a gay undead zombie character) would make it to the show; I was sorely disappointed.

I went to take a s--- in the porta-pottie, and it damn nearly tipped over on me on account it was sitting on an embankment. What a s---ty situation that would've been. HAH! Denver's crowd was awesome as usual, and I got somewhat drunk after the show. I actually checked out Marilyn Manson's set tonight, to see what that's all about. At some point during the set I had a nostalgic moment and called my old friend Eric Veal. I knew he didn't live at home anymore so whenever his parents answered the phone they were rudely awakend by the sounds of 'The Beautiful People' at 2AM EST. Haha. I think Eric would've been proud.

Day 10, Off show, Omaha, Neb.
Ahh, Nebraska! America's great prairie country and home to lots of corn. I actually don't know s--- about Nebraska at all. The Midwest to me is such a weird part of the country. Being from the east coast, things seem to just operate at a little slower pace out this way, and different areas seem slightly behind the rest of the country. I've been living in Chicago, Ill. off and on for the past year, so I have become somewhat accustomed to the Midwest life, although Chicago is the country's third largest city.

The show tonight was good. People made us feel at home, and really showed that they were enjoying the show. I'm pretty sure this is only the second time I have ever played this state, and I wouldn't mind coming back at all after a sick show like tonight. After the show we went to a local sports bar to celebrate. Irish car bombs can be lethal if you drink too many, and don't you forget it.