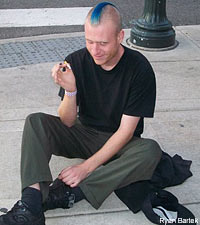 In penning the book 'The Big Shiny Prison,' Ryan Bartek yearned to smash every stereotype about the metal subculture. "As a music fan and individual, I've always leaned toward the metal scene as 'home base' while solidly retaining the DIY punk spirit at core," Bartek told Noisecreep. "'The Big Shiny Prison' is aggressively tailored to communicate that DIY ethos to the metal community in the most relevant way I could possible conjure.

"Extreme metal, as a subculture, is the most ripe for direct action. For instance, you go to Seattle/Portland, Ore. and the punks have taken over the city -- every street has a house venue, printing press, record label, a 'crust barracks.' Yet in the metal world, most are still pissing around with pay-to-play gigs, 'battle of the bands' contests, FM airplay attempts, know-nothing local 'managers' or just waiting for the magical label deal that will somehow book all their tours for them. Well, sorry, but that world is dead and never coming back--and all that remains is The Cyber Wild West and your own two hands."

Bartek explained "nobody makes any money doing this s---, so just drop it." If you want to tour then you're going to have to live like land pirates in a van for weeks on end.

"You perform because it's what's inside of you, and you create your own reality from scratch," Bartek said. "That's why guys like Lamb of God and Mastodon are huge. They weren't manufactured--they built their own DIY network from the ground up. They actually willed themselves into global success through Neitzschean stealth alone. So to provide direct example, my book thrusts all underground scenes into a blender, showing how each conduct their business. The reader therefore walks away with their own impressions and interpretations."

Bartek describes his book as a panoramic study of American counterculture that combines underground music journalism with classic autobiographical road novels by the likes of Jack Kerouac, Hunter S. Thompson and Henry Miller.

"Having no desire to plagiarize my influences I approached this through multigenre fusion, and the result is a work many have deemed an 'extreme tour diary,'" Bartek said. "In short, years of experience and influence exploded like a volcano, sending me flying off like a cannonball. I'd reached age 25 and realized that it was now or never, since my situation was so hopeless in Detroit.

"Since I'd secured the gig writing for Metal Maniacs as well as Amp, Hails & Horns, Pit magazine and dozens of print/webzines, such exposure had upped my credibility to a staggering degree. I was well aware that digital media was taking over and that this opportunity wasn't going to last forever, so in December '06, I declared via press statement that I'd embark on a nonstop road book throughout 2007. Two frantic weeks later I'd quit my band A.K.A. Mabus and hopped a Greyhound for San Diego where I knew some Michigan expatriates."

He used that "commune" as a base and worked in a kitchen for two months, hoarding every penny. Bartek then hit the road for months until he was broke.

"The campaign lasted from Dec. 21, 2006, through Oct. 13, 2007, having traversed 32 states and spending an estimated 606 hours on Greyhounds, all while interviewing hundreds of musicians/artists. I finished the rough draft on March 3, 2008, and then headed to Seattle to begin a new life."

Of the bands he interviewed for 'The Big Shiny Prison,' Edwin Borscheim from Kettle Cadaver was the "most intense." However, an interesting interview was also Columbine survivor Eric Parsons.

"I was the first journalist outside a German TV crew ever allowed into [Borscheim's] compound, and they paid him $1,000," he said. "He lives in this 'Devils Rejects' fortification where he has guys fighting in dog cages like a corpse-painted Manson Family. He's digging through this cupboard and he's like 'this is the board I nailed my cock to, this is the barb wire I was wearing while playing live naked,' and there's like hunks of dried flesh clinging to it and dried-blood hypodermic needles littering the floor. That guy was hardcore as they come...

"Meeting Columbine survivor Eric Parsons was interesting. I know that many kids have this silent hero worship of Klebold/Harris, or wear offensive T-shirts making light of the shootings. Well here's a guy with a red mohawk and thrash metal tattoos, and they nearly killed him, too. That never dawned on me, that maybe Columbine wasn't this purely 'redneck/meathead jock' atmosphere... I also want to add that at no point did I ever pimp my 'zine credentials when contacting bands. I made everyone think I was just some nobody writing some random book, because I only wanted to work with the sincere. So it's funny that all these huge bands were super accommodating to a total stranger, yet literally hundreds of nobody locals were too lazy to drive 10 minutes to meet for coffee or simply return an e-mail. And you know what? They're all crying now."

'The Big Shiny Prison' -- which is available for free download -- proves, Bartek said, that all art/music scenes are a loosely interconnected worldwide movement.

"[I] feel very strongly that every subculture represents but a splinter within a larger counterculture framework," Bartek said. "True, there are distinctions, but 'fashion' or 'musical style' are utterly moot points. The bottom line is that no matter our differences, by design we are the black sheep of a herd world that spares little room for the artist.

"My overriding goal with 'The Big Shiny Prison' was to branch into every subculture possible and unveil the inherent common threads. This is why you will find that virtually every 'character' in the book repeats the same essential notions. My sincere hope is that anyone who reads this book walks away with a broader understanding that we are all part of something larger, and that communication is the absolute key to strengthening our collective voice and moving toward a greater sense of mutual proactivity."