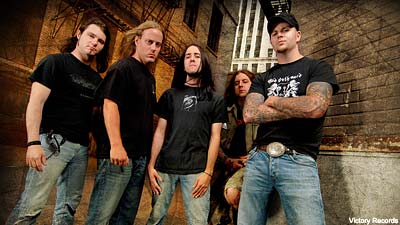 The nu-metal hedonists in Dope once called The Autumn Offering "the rowdiest band around," but frontman Matt McChesney is an image of purity and good health compared to what he was like a decade ago.

"I was doing loads of drugs when I was around 20, and one time I thought it would be a good idea to snort heroin and cocaine at the same time," McChesney tell Noisecreep. "That's what the song 'Narcosis' from [The Autumn Offering's new album, Requiem] is about. My heart felt like it stopped beating, and I had to be revived with an adrenaline shot just like in 'Pulp Fiction.'"

It wasn't rock 'n' roll that corrupted McChesney, it was life. He came from a broken, abusive home, was surrounded by negative influences and had to fight to protect himself. Pretty soon, he found he was good at fighting, and what's more he enjoyed it – a lot.

"I had an awful, awful temper when I was a teenager," he says. "I kept getting into fights and ended up being put on probation. Then, I got in one fight too many. I was so drunk, I don't even really remember what it was about. But there was some guy who spit at me and I ended up kicking him in the face. And they call that 'shod foot,' which is assault and battery with a dangerous weapon. So, I ended up going to court and violating my probation until the judge thought it was a good idea to send me away to prison for three months."

For McChesney, going to jail wasn't like an episode of 'Oz.' He didn't have to watch his back or kick anyone's a--. He was just bored. "It wasn't scary at all, it was just a waste of time," he says. "It made me feel like a loser. I was sitting in there with all these grown men who had fucked up and ruined their lives. It was just depressing."

In retrospect, the vocalist considers the experience motivational. Sure, he had a couple more bad drug years between the ages of 19 and 21, but after that he got his act together, went to college and got his bachelor's degree. His music career kicked into gear when he joined Twytch, a Lowell, Mass. group that changed its name to Hell Within in 2003 after two EPs. Then in 2006, during a rough period for Hell Within, he found out The Autumn Offering needed a new singer when vocalist Dennis Miller quit to live a 'normal life.'

"You really have to love it to be in a band nowadays," McChesney says. "It's so hard to make any kind of money, and as people get older they have more bills and other obligations, and life gets to be overwhelming. But as long as me and [guitarist Tommy Church] and [guitarist] Matt Johnson are in the band, we're gonna keep going because we're the only ones that have written anything for the last two records."

With two Autumn Offering albums under his belt, McChesney finally seems like he's in a pretty stable place. He's not doing hard drugs anymore and tends to avoid excessive partying. But he's still a potentially volatile dude, and from time to time he goes off like a pipe bomb.

"I'm pretty mellow most of the time, but if someone provokes me I'm not gonna stand there and take it," he says. "When we were direct support for Mushroomhead, this kid in the audience started spitting on me. There's a lot of shit I can take, but if you f---ing spit at me, be prepared to get your a-- kicked. The second that happened, me and Mike ran off the stage and laid these two little punks out. It's one thing to hear someone yell something obnoxious, but spitting is crossing the line."

Categories: Interviews
Comments
Leave A Comment
Back To Top