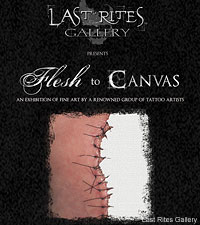 Famed tattoo artist Paul Booth – with his imposing stare and head tattoos- cuts an intimidating figure. And that's just his physical person. Booth's art is much more disturbing and dark, depicting, horror-inspired and inspiring images not for the faint of heart. Or mind. Or stomach. Booth has launched the Last Rites Gallery, which hosts exhibits of artists Booth is a fan of, every couple of weeks in NYC. The most recent collection is dubbed 'Southern' and ran from May 9 through June 7, spotlighting the work of Brian Viveros and Matthew Bone. The next gallery, called 'New Breed,' is slated to run from July 31 through August 30. An exclusive online preview of 'New Breed' will be viewable on Booth's website through July 19. 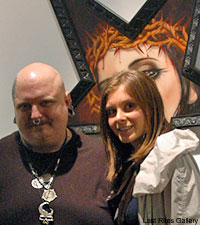 "One of the main reasons I opened this gallery in the first place was to be able to connect with artists whose work I admire," Booth, who is actually quite personable, told Noisecreep. "While I have shown their work before, this show will be an opportunity to spend more time with them directly and that is ultimately one of the key reasons I opened this gallery. I draw a lot of inspiration from the artists that I show. These guys really went all out for this show too, so I am feeling pretty proud to be exhibiting their work."

Booth said that those who visit the gallery can expect "midget amputees working security" and that the family of cannibals that Booth met while traveling through Tibet will be special guests. Is he serious? We're not quite sure, because you never can tell with Paul Booth! "Fans can expect the same high quality standards I have always been known for. I basically show art that I like personally and considering the fact that my standards are rather high, chances are fans will enjoy the show as well," Booth said. 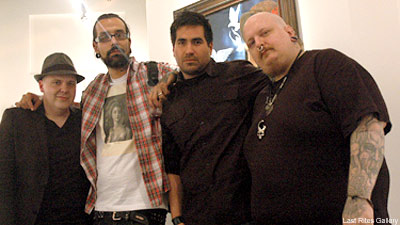 While the Jersey-born Booth garnered notoriety from his tattoo work, he admits he was a painter before a tattooist! "To me, the only real difference is the canvas," Booth said. "As an artist, my creative process is identical in both mediums. Tattooing has always been fine art to me. I find that the mediums complement each other very well. I actually use oil painting techniques in my approach to tattooing, and vice versa."

Categories: Interviews
Comments
Leave A Comment
Back To Top