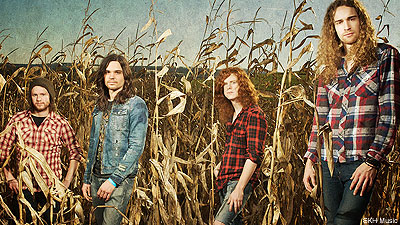 Taddy Porter lead singer Andy Brewer admitted he owes his band's success to "meeting the right people at the right time." As lore has it, the act's current management team went to see a show by a different band when it was struck by the openers, Taddy Porter. Subsequently, the management team put Taddy Porter out on tour with Saving Abel, another group with which it worked, and gave the Stillwater, Okla., act the exposure it needed.

"We had never been on a real tour, an extensive tour that is," Brewer told Noisecreep. "We got to see how it all goes down. We're not necessarily the same type of band as Saving Abel, but it's still rock music. We got to see fans and how [Saving Abel] live their lives on the road. There's debauchery that goes on. It was fun. They're a bunch of crazy guys. We're kind of like the new kids. We were watching them to see how they do it and see how we would do it. It was extremely fun."

Taddy Porter is gearing up to release their first album, a self-titled collection. It was slated to be released this spring, however, the band became motivated and wrote more material. "We were told it was going to come out in March or April, but we recently wrote three more songs and they're comparable to the songs on the album. We're going to let our record label decide whether or not they want to switch, maybe drop a song for a different album, the second album, or [use it for] B-sides. So I think it's going to come out in maybe June.

"We were going to continue to write songs anyway. After we finished our album, we were energy filled, 'Yes! We finished our first album.' We wanted to use that energy to write the other songs. These songs that we wrote they're more upbeat, faster, I guess it just shows our energy, our excitement."

"It was our first time ever to record an album," Brewer said. "So we really didn't know what we were getting into or what we were going to do. We [recorded] it all individually. We started off with drum tracks and then you move on, usually the vocals are the last things to be done. I took a break the majority of the time. I was in there all the time, though, trying to learn and soak up as much knowledge as I could.

"We really didn't know what we were doing, but we were working with Skidd Mills. He's worked with a bunch of artists, like Third Day. They're a Christian band. He was really, really fun. Toward the end, we'd wake up and work from [10 AM until 8 PM]. We did that for two weeks. Toward the end, we were kind of drained but when we got the product back it was well worth it."

Now, the goal for Taddy Porter is to visit Europe and play for the masses there. "We want to travel the world," Brewer said. "I don't feel like our lives are going to be complete if we're not able to take our music and play across the world and in front of different nations. That's our longterm goal. I imagine [English fans] would like our music. I still feel for some reason -- I don't know if I'm mistaken -- they like guitar rock and solos and movement and craziness and just dirty garage rock. I feel that they're into that."