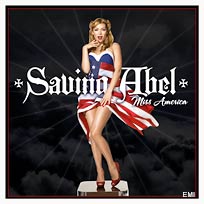 "There is always anticipation when it comes to the release of a new record," Saving Abel guitarist Scott Barlett says of the band's upcoming release. "You're nervous, excited and vulnerable. The key is to remember that this is rock and roll and those emotions don't matter once the record is done."

Saving Abel will release 'Miss America' June 8 via Virgin Records. The album marks the band's sophomore effort and the lead single from the disc is 'Stupid Girl (Only in Hollywood).'

While the band took ample time to write and record their new record, they also headed overseas to entertain our troops. The band headed to the Persian Gulf as part of the USO/Armed Forces Entertainment tour.

Back in America, the guys in Saving Abel are preparing for a tour with support from We Are the Fallen, American Bang and Taddy Porter. That tour kicks off June 30 in Kansas City and wraps up in late July.