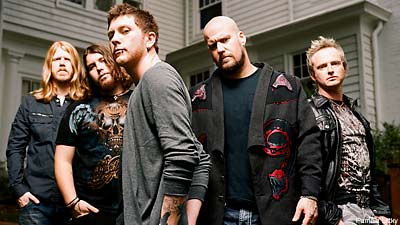 Mississippi rockers Saving Abel release 'Miss America' today. The album, on the Virgin label, is their second effort. While the band members are confident about the quality of their work, at least one of the guys was thinking about the so-called 'sophomore slump.'

"It's been with a lot of pressure," Saving Abel bassist Eric Taylor admits to Noisecreep. "You have that thing called the sophomore slump where you feel confident in the album, and we think it's definitely not a slump. And I hope everybody will like it."

While the cover art of 'Miss America' depicts a beautiful model draped in an American flag with a party-girl attitude, the song of the same name is more about the troops and being away from home. Saving Abel recently performed for troops overseas, and a lot of their inspiration came from seeing the men and women of our armed forces in action.

Explains Taylor, "We were actually over in Iraq when we named the album. We had a song switched on the album we called 'Miss America' that talked about a soldier writing home to his family and stuff. And we were over there and, 'Hey! We know we miss America, these men and women miss America. Let's name [the album] 'Miss America'!'"

Saving Abel kick off a headline tour tonight. We Are the Fallen will provide direct support. For a band with just two albums, Saving Abel has risen fast in the music world. This fact isn't lost on Taylor.

"A lot of bands struggle for a long time, just trying to break," Taylor continues. "And we're glad to have an album that [has] done so good and went gold and the singles that we had on the radio [have] done very well. And we're just happy that it took off, and we're just hoping that this one follows through like the first one did."

The first single from 'Miss America' is 'Stupid Girl (Only in Hollywood).'