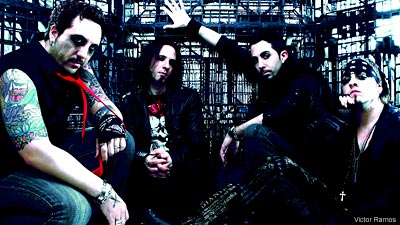 Formed out of the ashes of Crashbox and Moment Theory, New York City's Sweet Cyanide "definitely tried to avoid any similarities to the other bands," according to vocalist/guitarist Sal Scoca told Noisecreep recently. "We all lost a little bit of hope in those groups and the sound we were putting out there."

Currently leaning more towards the glam scene, elements of David Bowie, T-Rex, The Beatles, Stone Temple Pilots and Gilby Clarke can be found in Sweet Cyanide's self-titled debut. "I'm just a music lover," Scoca says. "In each song, I tried to touch a different style. It doesn't get more sincere than that. We just wanted to do what we like. Honestly, this is the first project I'm 100% in love with every aspect of it, and I guess it shows."

The name Sweet Cyanide rolls off the tongue easily – and instantly causes parental alarm. "Back when I was in high school, it was the name I came up with for my very first rock band. Remember the scare back in the '80s with cyanide in Tylenol? It referenced that. Something clicked and it became Sweet Cyanide. It's an old name. I've had it since eighth grade, so '92 maybe."

Simplistic and eye-catching, the album cover looks as though it's upside-down based upon the pills' shadows. "Our drummer Mike [Bambace] does all of the artwork and design. He just works from a different place. He's never on Earth as I like to put it," Scoca admits. "He's always out there. There's a reason why he did that. It's not just done for effect, but I'm not exactly sure why. I can tell you why he put all the naked chicks on the inside though – we're very into that! It's what we come from. Some of the girls are personal collection pictures and others are pictures we've always had floating around."

The aforementioned X-rated collage will probably exclude the album from retailers such as Wal Mart. "It's very likely they won't carry it. But quite frankly," Scoca adds. "We're not really shooting for the Wal Mart or Disney audience. We're looking for guys and girls who party and appreciate good music."

Sweet Cyanide add their own twist to the fabled sex, drugs, rock 'n' roll scenario. "I tend to write lyrics from a darker perspective," reveals Scoca. "I'll delve into topics that might make not necessarily everyone, but people who have experienced certain things, uncomfortable."

Speaking of uncomfortable, recording in a haunted studio would make most people feel just that way. "We have a rehearsal space that we've been using for a while. When we started loading in Pro Tools and all the gear, little things were happening. Lights were flickering, which you usually attribute to bad electrical or whatever," Scoca intimates. "Then we started tracking the record and parts would pop in that were never recorded. When we looked into the history of the building, we found out from the actual owner that it used to be a halfway house for criminals and somebody killed themselves in there. Even if we're going for a poppy, happy song, it definitely puts a tinge of eeriness to it."

While an actual ghost was never seen, Scoca mentions that "[bassist Angelo Fariello] used to take girls there at night and have sex with them in the control room, which was fine. It's a very comfortable room. We have couches, AC and TV. He said a couple of times he'd see shit move or a shadow – but he was probably too drunk to realize what he saw."