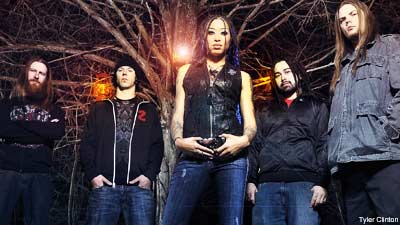 "We plan to finish out the rest of the year, doing as much touring as possible," Straight Line Stitch vocalist Alexis Brown told Noisecreep. Touring is the bread and butter for a new band -- and the way to make yourself into a household name, one fan at a time. So SLS are doing things the right way, continuing to promote 'When Skies Wash Ashore,' released via E1.

But beyond the rest of the '09, Straight Line Stitch will unleash a new album in 2010. Fans can expect "a new album that can elevate us even further in the world of metal. And even more non-stop touring, as well as the launching our European career by releasing both 'When Skies Wash Ashore' and the new album. We also have movie soundtracks on our radar," Brown said.

In addition to being a metal frontwoman, Brown has a bit of a Disney festish. "I am a huge fan of Walt Disney's Goofy character," she revealed. "I collect anything that has his face on it, even though I have never been to Disney Land or Disney World before."

With the amount of touring Straight Line Stitch plan to do, Brown may be able to finally visit Disney and see Goofy in the flesh, er, plush, when the band plays Los Angeles, Anaheim or Orlando! SLS are currently on tour with Arkaea.