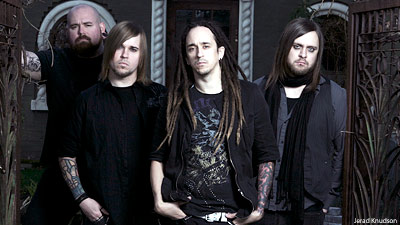 If the music thing doesn't work out for Since October, who released 'This is My Heart' last year, vocalist Ben Graham possesses an interesting skill set that he can fall back on, beyond his impressive voice. He knows how to skin alligators and can craft wood furniture with his bare hands.

Having grown up in South Central Florida with his brother, Since October guitarist Luke, Graham was raised on a farm with a log cabin and a barn. "We had chores like, feeding cows, horses, goats, hogs, chickens, and ducks, gathering the eggs and feeding giant bottles of milk to baby calves," Graham told Noisecreep. "All of this was done in the morning before school and then again at night." The Graham property included a big pond, which "was a huge attraction for alligators. The alligators would eat our ducks, so we had to do away with them," Graham said. This lead to his deftness with "dealing" with the predators. "I don't believe in killing an animal unless you are going to use it for something beneficial, so when I would shoot a 'gator, we would eat it for supper that night," Graham revealed.

So does it taste like chicken? "The tail is great meat, but the pieces that we would fight over at the table are the two little nuggets of meat behind the head," the singer said about the, um, delicacy. "Those are the best parts of a 'gator. We would usually dry out the feet and head, and use [those parts] to scare our cousins from up North!" Graham gave a little insight into the butchering process, which he deemed, "crazy," saying, "You have to tie the mouth shut even after it's dead. I've seen a head snap at me without a body. I've also seen a body without a head get up and walk around. It takes two to skin a 'gator, but it's well worth it. Fresh gator meat is great!"

As for his self-taught, not-formally-trained skill with wood, Graham said, "It's the creation part that I like, making something out of basically nothing." He says his wife enjoys the fruits of his labor and the finished product more than he does. He built a bed for his missus as a wedding present, with a seven foot tall headboard and a king-sized mattress that sits four feet off the ground. Graham says woodworking is an effective way to kill time when off the road. Regardless, Since October slays hard enough to remain Graham's main job.

Download 'This is My Heart'
Filed Under: 794897, Since October, SinceOctober
Categories: Interviews
Comments
Leave A Comment
Back To Top