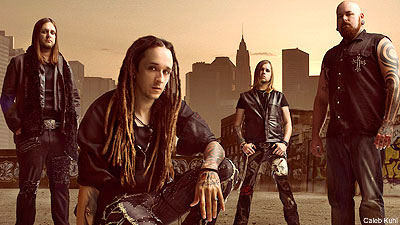 Noisecreep is proud to premiere the new video from Bradenton, Fla.'s Since October for the song 'The Way You Move.' The video, shot by Van Alan Blumreich, incorporates a modern take on the age-old 'damsel in distress' theme. The hero can be seen jumping, climbing and flipping across city rooftops (and a certain dreadlocked vocalist) -- even delivering a slow-motion kick to a bad guy getting in his way.

'The Way You Move,' the alt-metal band's second music video, promotes a track from their sophomore release, 'Life, Scars, Apologies,' which is out this week on Tooth and Nail Records. Their first single, 'Guilty,' from their previous effort, reached 21 on Billboard's Hot Mainstream Hot Tracks chart.


Since October have a month full of shows scheduled in July to support 'Life, Scars, Apologies.'

Download Since October Songs
Filed Under: Since October, SinceOctober
Categories: Videos
Comments
Leave A Comment
Back To Top