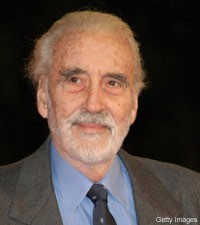 Fans of the classic 'Dracula' movies, rejoice! Sir Christopher Lee has announced plans to record a metal album. The album will be about Charlemagne, the first Holy Roman Emperor. Lee says he's a distant relative of the emperor.

The album will be called 'Charlemagne: By the Sword and the Cross' and will be released in March. There will be guest vocalists and an orchestra on the recording. Don't expect the album to sound like Black Sabbath or Iron Maiden, though. Think symphonic metal. The album was written by Italian composer Marco Sabiu.

"There's a lot of characters in this particular album. A lot. There's Charlemagne himself of course, which I sing, and then there's young Charlemagne, Charlemagne's father, Charlemagne's brother ... [and even] the Pope," the celebrated actor explained during a recent interview made available on YouTube.

This isn't Lee's first foray into the music world, either. He released a cover album in 2006, which included songs made famous by Frank Sinatra among others.