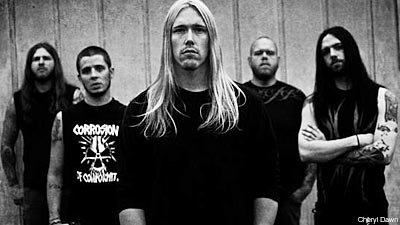 The apocalyptic film 'Legion' is in theaters now. While the soundtrack features only the official score, the film itself features many different types of music, including Willie Nelson, Merle Haggard and the Showdown. Christian metallers the Showdown released 'Back Breaker' in 2008 and their song 'Achilles -- Backbreaker' was used at a crucial point in 'Legion.'

Picture it: 'Achilles -- Backbreaker' plays in the background as a group of possessed souls swarm a minivan stopping for gas. "I had actually seen the ['Legion'] previews and thought the movie looked pretty interesting, so I was pretty stoked on it; seemed like an appropriate movie for our music," Showdown guitarist Joshua Childers tells Noisecreep.

Above all, Childers says 'Achilles' is a perfect choice for 'Legion.' After all, the Showdown often write lyrics dealing with Biblical themes. Considering 'Legion' deals with the end of days and the last judgment, any song from 'Back Breaker' could've been used in the film.

"The whole record was kind of wrapped in Greek mythological terminology and analogies as a storytelling device and to give it a theme. So it seems to fit well in a movie that's trying on some level to write a new myth," says Childers. "The song itself is about overcoming adversity. I think fighting a demon child with a fallen angel on the roof qualifies as a pretty adverse situation!"

The Showdown will return to the studio this month with a new record due this summer. A tour will follow.