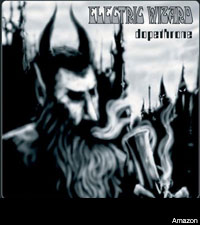 Well, today is 4/20, and you know what that means! People everywhere are breaking out bongs, blunts, and spliffs in celebration. In the spirit of 'herbal indulgence,' Noisecreep decided to ask a few qualified rock luminaries and a handful of respected music journalists what they thought about the term 'stoner rock.'

Scott 'Wino' Weinrich (Shrinebuilder, The Obsessed, The Hidden Hand):
'Stoner' is definitely a California term. I never heard it once ever even before the movement on the east coast. It has been used in Cali and the west coast for decades. 'Stoner Rock' invokes melody and especially an emphasis back on guitar.

Scott Reeder (Kyuss, The Obsessed):
The term 'Stoner Rock' didn't exist during the Kyuss years - it was frustrating to walk into a record store and have your music filed just under 'metal.' The feeling I got from our music was a lot closer to punk, but it was a weird mix, I guess, that was hard to put on one shelf. It would've been good for us to have the tag "stoner rock" back then. It's a wide blanket, though. I have no idea what the classification means, whether or not it's because the musicians were high when they made the music or the music itself is cool when you're high. Seems like most all music can be appreciated on a deeper level with a little herb. In a way, it narrows down your other senses and frees up your mind to focus more intently on one thing, and make it be a more powerful experience, whether you're listening or creating. That's exactly why I named my first solo album 'TunnelVision Brilliance.'

Will Fiore (Zoroaster):
Acid. It makes me think of acid and being on acid when it was still 'fun' to be on acid. When I first heard that term I was doing a lot of acid and I was smoking a ton of weed. But I think I was doing more acid. Or maybe the acid I was doing was just better than the weed I had available at the time. I'm not quite sure. I like [combining weed and music]. It definitely adds to the experience, I think. But I don't believe it's limited to so-called 'stoner rock' music. Shit, I think it makes everything better (movies, food, sex, sleep...). Especially writing music! Although sometimes you'll start to overthink that shit and before you know it there's no soul left to it. But if you get high and just let it take its time and come out then it' easy. Trouble is, you probably won't ever remember it.

Corey Bing (Fistula):
The term gets thrown around soo loosely, that it seems watered down, just like most of the bands that are being labeled as 'stoner rock.' why don't you say 'Doperock, or DrugRock? It's just a P.C. way of classifying people that like to party and/or live their lives with drugs that play heavy music. Most of the 'Stoner Rock'-dubbed bands have a lot more going on in their sound just to be pigeonholed to that retarded term. And on the other hand, it's just music, so who gives a f*ck really? Can someone please pass me the Butter, the Metallica, and the Stoner Rock please?

Ben Hogg (Beaten Back to Pure, Birds of Prey):
It's a dumb tag, for a dumb subgenre, comprised primarily of wanna-be stoners, which is pretty f*cking dumb thing to be. I prefer drinking whiskey for music I'm into making. Weed just leads to lazy riffs, liquor brings on a hell paced death. Get on board losers and come on home for the big win!

John Srebalus (Filmmaker, 'Such Hawks, Such Hounds'):
Like a lot of subgenre terms, it's as rooted in stereotype as it is useful shorthand. As applied to a fairly narrow segment of heavy rock, I think it's fitting. A fair number of the musicians do get stoned, and the music itself complements the marijuana high. Then again, I imagine the same goes for jazz or opera.

It's used a bit too generally in my view -- to encompass doom, psych and some fairly straight-up metal, for instance -- but it's useful and accurate when describing bands referencing late-'60s/early-'70s hard rock and doing so with warm, organic sounds and without industry grooming. It's sufficiently practical that I suspect even a person with only a vague familiarity with contemporary rock could probably conjure something pretty close to a Monster Magnet or a Nebula.

Different drugs certainly do affect the way music is played and heard. It's well documented in musicians' own words, and I'd imagine by neuroscientists as well. Talent exists beyond the influence of drugs, so a good song has to be in you whether you're straight or high. But it's pretty clear that things like THC and psilocybin, as they're rooted in the earth and relatively unrefined, produce mental states that are often nature-conscious and translate musically as 'earthy' or 'organic.' I wouldn't want to have to describe the sound of dirt, but I'm pretty sure there's no vocoder in there.

J Bennett (Journalist - Decibel, Revolver, Alternative Press):
'Stoner rock' is misleading in that The Leaf tends to enhance one's enjoyment of most music. The Grateful Dead were the ultimate potheads and their output falls well within the confines of the 'rock' idiom, but no one calls their music 'stoner rock.' Willie Nelson smokes enough weed to kill most men half his age, and - again - his catalog certainly finds its roots in rock n' roll, but no one refers to 'Red Headed Stranger' a 'stoner rock classic.' The rapper Li'l Wayne apparently gets higher than Bill Walton and Robert Parish at Reggae Sunsplash. He also recently recorded a 'rock' record. But no one's calling that shit 'stoner rock.' So you can see where I'm going with this. As a stand-alone term without context, it's completely arbitrary. Still, the genre has loosely defined factors for what qualifies, and the bulk of those factors seem to originate in the mighty detuned sounds of Black Sabbath (a.k.a. the Iommic canon) and Kyuss (a.k.a., the Hommic oeuvre). As such, the bands that embrace or are saddled with the 'stoner rock' signifier tend to find inspiration in/emulate/rip-off one or both bands. Or so says the cultural imperialist/media wizard/carpetbagger who coined the term. But to me it's all semantics.

Brandon Stosuy (Journalist - Stereogum, Pitchfork):
I think there's definitely a connection between smoking weed and making music, but maybe not something as specific as 'I smoke weed and therefore I make stoner rock,' because there's obviously Cypress Hill, Pantera, Willie Nelson, Snoop Dogg, and Paul McCartney calling joints 'herbal jazz,' etc. So, yeah, pot in music, but not genre-specific. For me, it's more about a specific sound -- doomy, psychedelic, slow/mid, fuzzed, vintage in a way, etc. In my mind, you can make 'stoner rock' without being a stoner. I mean, the drug culture adds an air of authenticity, of course -- like when you see those Christian black metal bands, it doesn't seem entirely right, but... I do think it can be done. But now that I write that down, it seems more complex all of a sudden. There are clearly certain lyrical tropes associated with stoner rock as well. If you're sticking to that realm and making music with the traits I mention above, I don't think folks will make you pass a urine test to make sure you're truly a stoner rock band.

Cosmo Lee (Journalist - Decibel, Pitchfork, Invisible Oranges):
Stoner rock is probably more of a marketing term than a useful category. It seems like an extension of the classic and psychedelic rock of the '60s and '70s. Things stoner rock is not: digital, precise, cold, technical. Things stoner rock probably is: analog, groovy, warm, groovy. Stoner rock is just one of those things that you know it when you hear it. Some stuff that isn't classified as stoner rock could probably fall under its sonic parameters. Motorhead's slower songs come to mind. If you're talking about stoner metal, the main defining element is probably some amount of the blues, coupled with heaviness and thickness. I don't smoke weed, though I have been told by many that it enhances music listening. If the music is good enough, it will change your consciousness anyway.