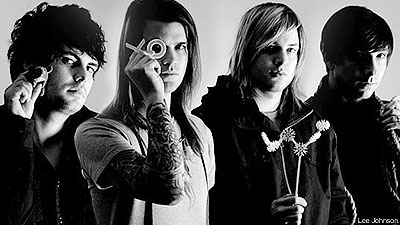 Secret and Whisper's new album, 'Teenage Fantasy,' isn't some pedophilic perversion, as some might think the title suggests. It takes a look at the mythos of being a rock star. In keeping with the album's theme, drummer Ryan Loerke broke down the main wannabe rock star fantasies and myths that every aspiring rocker dreams of! And we aren't talking two girls at once or doing a line of coke off a hooker's cleavage. We're talking the real deal.

Getting signed means you are going to succeed: "Striking a record deal is an exciting thing for those bands who can attain that. However, it means that you actually have to work twice as hard! You now have the accountability of your own music and your new label family. Success is never guaranteed and sometimes things just don't line up. This is why you have to play in a band because you love it, not for fame."

You're in a band, so you're making a living off it: "While you may have landed that record deal, you will definitely be working a job to survive. Some bands get a good advance, but it's just that: an advance. It takes years and years to get to a point where you can say you are a 'professional musician,' meaning you don't have a day job. I personally think it's good to have something to keep you grounded and in touch with the world."

Guys/gals in bands 'rock all night and party every day': "Props to Kiss for just killin' it in that sense, but I don't think that defines every band member or 'rock star.' In Secret and Whisper, everyone is everywhere from mid 20s to early 30s, so that stuff isn't as prevelant. But we like to have a good time here and there. You know, I don't think there are any 'rock stars' any more. Where are the Billy Corgans, the Morriseys, Tommy Lees, Jim Morrisons, etc? I think a rock star is more someone who is so iconic and individual in their art, that they can't be forgotten; not someone who parties their per diems away and sleeps with randoms. It won't happen with all the s--- bands these days, because everyone is so willing to sacrifice their music for success. How can there be anything iconic about that? It's going to be sad looking back in 10 years seeing that few bands have stood the test of time. 'Rock stars' as we know it are a dying breed. It's time for the individuals to step up."