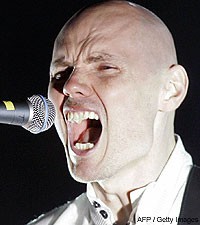 Despite last week's social networking drama with Courtney Love or the news that he is (was?) dating Jessica Simpson, Billy Corgan is still one of the most important figures in modern rock music. Smashing Pumpkins, in their original form during the 1990s, were one of the most ground-breaking bands that emerged during the height of alternative rock, all while rejecting the punk rock roots that sprung grunge and other forms of metal.

Secret and Whisper, a newer Tooth and Nail band, still consider Corgan one of the original rock stars. On the same day of Billy's Twitter rant, he also laid down the 10 greatest heavy metal records of all time.

The first on the list is the Stooges' 'Funhouse' from 1969 -- perhaps the best record of Iggy Pop's career. "It put the punk into metal or the other way around," Corgan commented. Also included is Led Zeppelin's 'Physical Graffiti.' Definitely one of the band's heavier albums, he acknowledges that while they may not fall into the metal category, he asserts that the band "did create different blueprints that are still being used in Riffland. I love this record because it is so damn dark. 'In My Time of Dying' is as heavy as anything released." When put like that, it's hard to argue such a statement.

There are several expected artists on the list, such as Slayer, Judas Priest and Pantera, and of all the projects Ronny James Dio has ever taken part in, Corgan goes with Rainbow. 1977's 'On Stage' was his particular choice, and says that he loves this album because it's a result of taking a great band with a great set of live songs and they "just go for it."

Corgan's first choice is something "heavier than God," and what he considers the band's music would sound like if they were making it during Earth's final hours. He may be Twitter-fighting (Twighting?) with other longtime celebrities in his field, but Corgan clearly still knows what's good and why.