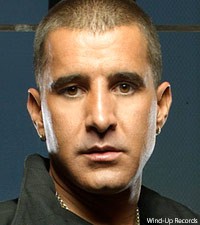 Creed's Scott Stapp is newly shorn. Gone are the shaggy, chin-length locks that were his signature during his early '00s heyday. He's now sporting a buzz cut, which draws attention to his wide eyes. Perhaps it's a subconscious metaphor for changes that have marked his life since splitting his 35 million-selling band in 2004 amid rumors of drinking problems and other external factors putting internal pressure on the band.

Stapp recalled his initial prediction that his band would go on to become one of the world's biggest, saying, "I have had this passion since I told some kid who was trying out for the band and didn't show up for practice, 'You are making the biggest mistake of your life and will miss out on being in the biggest rock band in the world.' That was before we even played a note or song. I had that naïve conviction and passion about what Mark [Tremonti] and I were doing. This time, I have a little more knowledge and a reality check."

After taking a bite into a sandwich wrap, Stapp looks up and muses, "What an asshole I must have sounded like saying that to that dude!" Turns out, "that dude" is now a lawyer, and Stapp and Creed did climb to the top of the rock 'n roll mountain and reigned supreme for several years. The soft-spoken Stapp speaks in careful, measured tones and is more than complimentary towards his bandmates who sat across from him in a corporate conference room in Manhattan after the band announced it was reuniting for a summer tour that will be accompanied by 'Full Circle,' their first new album in years.

Do you think that Creed will be able to attract new, young fans who weren't able to experience the band during its heyday simply by virtue of their birth and being too young at the time?

It's not a generational thing. It's a human being thing. Yes, our sound is evolving and instead of playing acoustic songs, we still like to rock and we still write music with no boundaries, drawing from places that maybe we didn't before. We are ready to push and not be a cookie cutter of the old, as that doesn't represent who we are now. Our brand of rock 'n roll is fresh and new and is full of all of us. With [bassist] Brian [Marshall] back and Scott [Phillips]... where he has come as a drummer, my gosh, I didn't think you could get better, Scott. [Nods to the drummer, seated to his left] And Mark is the diligent player. What can you say about Mark Tremonti that hasn't been said?

Creed are proving that you can go home again with this reunion!

Three of these parts here inspire me. We were friends first and a record company owner happened to come to a small show in Tallahassee and we got discovered the old fashioned way. It was like our fourth or fifth show. Now, it's a new chapter and the story goes on.

What did you learn during your time apart that you are bringing back to the band now?

I have a deeper appreciation and respect for the talent, ability and gifts of these three guys in front of me. There is a trust that is even deeper than it could have ever been. Without having been away and experimented with other artists, I wouldn't have realized that only three other guys in this world, who are in this room, can incite and stimulate me artistically and creatively and pull from my subconscious. I am humbled by this whole situation and have a renewed vigor. I have a lot of stuff stored up inside of me that hasn't been released. That's what only these guys can trigger.

How has the initial "reunion" gone? Are things just falling back into place?

At a recent rehearsal, Mark was playing something and the guys joined in. I was feeling emotional and didn't know why. It's these guys who pull it out of me. In the past, we had experienced lows that we'll never see again. As you grow and are committed and consistent, then, the next time there is a fall or problem or a personality quirk, that bottom ain't down there. It's up here [lifts hands higher]. The level of falls get smaller and smaller.

This reunion tour and album – is it a "one and done" or is there no cap on it?

The best is yet to come.