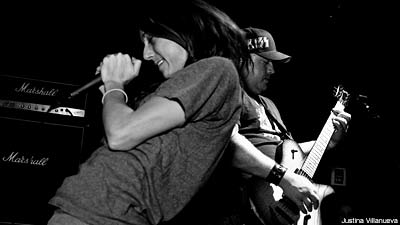 This writer has been hung up on an album that was released in 2007 for months. The album makes a trip to hell seem like a warm and spiritual journey. It's the kind of album that can really change lives and strike epiphanies. The album that I can't stop listening to is Rwake's 'Voices of Omens.' It's beautiful, dark and full of some romantic riffs.

"I wanna thank Adam [Shore] for this party here tonight," Rwake frontman C.T. told the crowd at New York City's Le Poisson Rouge Nov. 15. C.T. was sincerely appreciative of the opportunity to play just before Shrinebuilder in the downtown heart of the Big Apple. He was also very stoked for a newer band on the scene.

"I loved Liturgy. I was f---ing blown away!" C.T. said of the New York-based black metal group.

As the rest of the band set up, C.T. sat next to the drum set calmly holding his head. He was preparing for the four-song set -- two songs from their fourth album 'Voices of Omens' and two new ones -- that left the venue in emotional ruins. As their second and last night playing with Shrinebuilder, Rwake was on fire. It could've been the 10th night on a month-long tour.

The band has not announced a new album yet, but the songs they performed Sunday night were proof that something is in the works. C.T. is also currently working on the 'Slow Southern Steel' documentary.