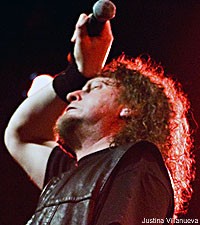 A Saturday night in New York's Times Square is usually a pretty scary scene for the average metalhead. But on March 6, metal pioneers Voivod were in town. In my hood, that always changes everything about anything.

The band hit the stage and dove right into their self-titled song 'Voivod' with barely an introduction. Frontman Snake -- also known as Denis Bélanger -- danced around stage most of the night. Everyone seemed to be at their prime happiness. It took about half their set for people to start crowd surfing, but once they did, there was a nice stream of floating bodies.

"Alright guys, about a year ago we released an album called 'Infini,'" Snake said to the crowd. It's the kind of comeback album that everyone had been waiting for since 1989's 'Nothingface' record. The album has songs that were recorded with former guitarist Piggy, who passed away in 2005.

"You guys set for this? It's called 'Global Warming,'" Snake said. Afterwards they played the 'Nothingface'-era song 'Missing Sequences.'

All in all, Voivod's set was fairly short for band that has put out 12 albums in 26 years. It's enough for me to start an e-mailing campaign to get the band to do a headlining tour in the fall. Who's with me?

Along with a couple more tour dates with Kreator, Voivod will also headline Relapse's SXSW showcase March 17. You can also catch them at Scion Fest in Columbus, Ohio on March 13. They will be playing with Cannibal Corpse, Shrinebuilder and a boatload of other must-see metal acts.