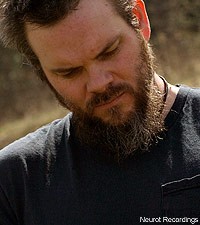 Now that Scion's second annual metal extravaganza has come, seen, conquered and gone, we metal folk have some time to breathe easy (until Maryland Deathfest, anyway) and reflect upon shows gone by. During the blessed downtime, this Noisecreep writer had the very special privilege to speak via email with one Scott Kelly, an extreme metal icon and musical legend in his own right.

His latest non-Neurosis venture, Shrinebuilder, graced one of Scion Rock Fest's main stages and recently rumbled through NYU's hallowed halls alongside Wolves in the Throne Room and Salome. 2009 was a busy year for Shrinebuilder, and 2010 is already ripe with promises of bigger and better things. In our Q and A, Kelly looked back upon his past year -- especially Shrinebuilder's inaugural run of dates -- and revealed a few chestnuts about what fans can expect to see, hear and feel in the coming months.

You recently completed a string of live shows, a first for Shrinebuilder and undoubtedly a special experience for everyone involved. How did it feel to be up on that stage playing those songs?

It was surprisingly comfortable for me. I was in shock that we had actually pulled it off, but it felt like home. It's a real flesh and blood band, no compromises.

How did the audience react?

They seemed to be ready for it. A lot of respect was given, a lot of expectation was brought.

Which show got the best response?

I would say N.Y.C. or Austin. But they were all good.

Will Shrinebuilder be making any more U.S. appearances in the coming year? I know you're confirmed for Roadburn, and a European tour seems like it may be in the cards. Any truth to this?

Europe tour is in the cards following Roadburn. More U.S. dates as well, but we can't let them out of the bag yet. Soon you will know.

What brought you all together in the first place, and what would you say is Shrinebuilder's purpose as a band?

A great vision by Al [Cisneros of Om/Sleep] and Wino [of Saint Vitus] brought this to light. This band is here to serve its master.

As far as the album goes, how satisfied are you with it?

Do you feel it has lived up to your expectations, and become something greater than simply the sum of its parts?

Yes to me it clearly grew into something beyond our initial thoughts. It was a sign of things to come.

One of the most striking characteristics of Shrinebuilder's music is its ability to seamlessly integrate each member's signature style and influences into one cohesive, flowing sound. How hard was it to write these songs?

It was a constant flowing river from my perspective. There was never a moment that it didn't get better and go deeper.

What can we expect to hear from Shrinebuilder, as well as any of your other projects, next year?

I will have a new solo record next year. Neurosis will probably be 2011, but we might get lucky and get it done and recorded in time for next year. Shrinebuilder is writing material, so let's see where we end up with it.