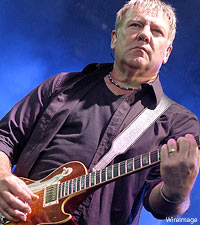 Rush fans take note -- the legendary progressive rock band could be back on the road with a new album in 2010. The trio would love to work again with Nick Raskulinecz, who co-produced the last studio album, 'Snakes & Arrows,' but he'll have to hang on a bit longer.

"I think Nick calls the office once a week," laughs guitarist Alex Lifeson, "just to make sure we're still planning on getting back to work at some point."

Lifeson, lead singer-bassist Geddy Lee and drummer/lyricist Neil Peart played 120 shows behind 'Snakes & Arrows' and "were pretty beat by the end of it," says Lifeson. "We'd been working constantly for the last eight years or so, and really needed a break, and decided to take a year off. We're sort of coming to the end of that period.

"Neil and his wife had a baby just a couple of weeks ago, so he's asked if we can just wait a little bit until he gets settled and see how he feels about getting back to work or when to get back to work. So we're sort of playing it open right now."

Lifeson says he's been doing a little writing at home in Toronto, "just getting myself back into the groove again with recording and stuff like that. I would guess that sometime in the early fall we would get back together and start writing again, and then hopefully by next summer, we'd be ready to tour."

Filed Under: Rush
Categories: Interviews, News
Comments
Leave A Comment
Rush Members Perform With Dave Grohl, Danny Carey + Chad Smith for Taylor Hawkins Tribute Concert
Rock + Metal Bands That Played Over 150 Shows in One Year
Rock + Metal Bands That Have Played Over 2,000 Shows
10 Rock + Metal Tours from 1982 We Wish We Could See Now
Rock + Metal Artists Who Were Replaced Before Their Band Got Famous
Anthrax’s Charlie Benante Names The Two Drummers Who Invented Air Drumming
37 Rock Musicians With Stars on the Hollywood Walk of Fame
50 Rock + Metal Albums Turning 40 in 2022
10 Musicians Who Discovered Another Huge Artist