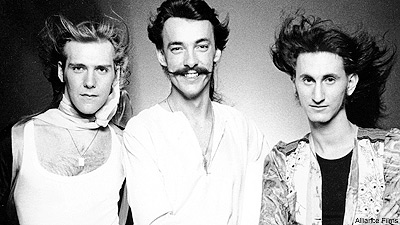 Even though Rush was never a band to toss televisions out of windows or do strange things to groupies with fish, film directors Sam Dunn and Scott McFadyen manage to tell an engaging story in the documentary 'Rush: Beyond The Lighted Stage,' which screens worldwide on June 10.

Here is a band that has sold a staggering 40 million albums in their 40-plus year history, sells out tours around the world, is worshiped by some of today's top musicians but, still, famously, have not been inducted into the Rock and Roll Hall of Fame. A story of friendship, drive and respect, the film traces their formation in the suburbs of Toronto, featuring astounding never-before-seen footage and photos, through to their current status as "the world's most popular cult band," as singer/bassist/keyboardist Geddy Lee puts it.

"This rock band got me all fired up about literature," says Bach in the film, recounting how he bought Ayn Rand's 'The Fountainhead' at age 12 because of Rush's '2112,' while Black recites passages of Rush's music in the comically intense way only he can, declaring the trio's adept musicianship "not even human." 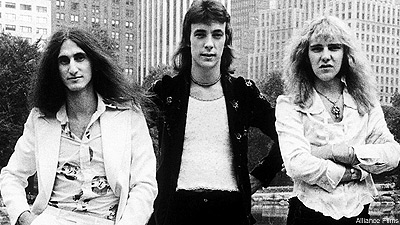 Lee, guitarist Alex Lifeson and drummer Neil Peart are often perceived as cerebral musos, always "over-reaching" musically, an accusation to which they admit, but what the documentary also shows is that the three don't take themselves nearly as seriously as people think.

"Alex Lifeson is probably one of the funniest people we've ever met," says Dunn. "He plays in Rush, which is probably one of the most serious bands that ever existed. Frankly, I think if it wasn't for Rush's humor and sense of humor about themselves and what they do, this movie would have been really boring.

"And it was the juxtaposition between their humor and their camaraderie as friends and their creative direction in terms of creating music that's very challenging and intellectual and complex, that was really fascinating to us.

"What we learned, and what we think was conveyed in the film, is that part of what enables them to create this complex music, and go through so many different changes in their sound over this period of time, is that when they get in a room they just want to laugh together. And I think that's unique about Rush. We've certainly never seen it before."

And the pair has interviewed dozens of musicians. Dunn is a noted "heavy metal anthropologist" whose previous documentaries with McFadyen have explored the genre on a worldwide scale: 2005's 'Metal: A Headbangers Journey' delved into this much maligned and stereotyped music; 2008's 'Global Metal' took them from Europe to Asia and the Middle East to unearth the extreme subcultures of metal; and last year's 'Iron Maiden: Flight 666,' covered the English band's whirlwind 23-show, five-continent, 45-day 2008 tour in a jet piloted by frontman Bruce Dickinson.

"When you make a film about a band that's been around for so long," intones Dunn, "you expect that there's going to be some kind of conflict. What we focused on, like during the '80s when the sound of the band started to change and Geddy wanted more keyboards and Alex wanted to keep the rock 'n' roll tradition of Rush, we expected it to be some sort of huge conflict. But it wasn't. There was disagreement but they resolved it.

"I think that became part of the story of Rush. I think that it's a band that knows how to communicate with each other and we know from interviewing bands and being in bands that rock bands typically don't know how to communicate," he laughs. "And Rush do. That's a huge part of their legacy. Why they've been able to shift their sound so many times is the fact that they're able to get in a room and create something that everyone has a piece of. There is no single person shaping Rush."