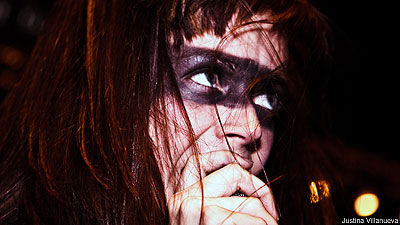 A Friday night at Brooklyn, N.Y.'s Union Pool usually consists of madness from wall to wall. And with snow still on the ground, Feb. 12 was no different. Well, it was a little different, because the back room was filled with people waiting to see Made Out of Babies, Unsane, United Nations and Dark Vibe. Even though the first two bands are native New Yorkers, it's not often they play shows.

Just one song into Made Out of Babies' set, drummer Matthew Egan -- who also plays in Cleanteeth -- came to the front of the stage with a very broken kick pedal. "Does anyone have another one of these?" Exactly when a fan suggested using duct tape, all the screws and nuts fell out. Egan's pedal was literally in pieces. Don't worry, though. He borrowed someone else's and the show went on.

I've heard of frontwoman Julie Christmas getting violent on stage, but I didn't realize that she was usually the victim at hand. Midway through the band's set, Christmas cut herself. With blood dripping down her face, Christmas told the crowd, "You should see the other guy."

All the way from the back of the sold-out show, I could only see Christmas' reflection in the giant mirror behind the bar. And it looked pretty rough from back there. Even with blood and black makeup smeared on her face, Christmas was incredibly girly. Her mix of poppy and angry vocals are truly one of a kind. It's like Britney Spears collaborated with someone on the lat-'90s Kill Rock Stars roster.

Before the band played their last song of the night, Christmas was heavily huffing into the mic. Someone else in the band said, "I'm going to take this tuning and breathing opportunity to thank all the bands ... but I'm not going to thank Unsane until after they play."