"Queens was great, but for those of us who were into rock 'n' roll and that whole look and lifestyle, it was a little tough at times. I was kind of in between a greaser and one of the really nerdy kids. I never really fit into any gang till I played guitar in a band," Ricky Byrd tells Noisecreep about the New York City borough he grew up in during the early '70s.

A veteran guitarist/songwriter who was a member of Joan Jett and the Blackhearts during their hit years, and played with the likes of Roger Daltrey and Ian Hunter, Byrd just released a fantastic solo album appropriately titled Lifer.

On the album, Byrd takes us on a musical journey through the different eras of rock and soul that have defined him as a player and when it comes down to it, a person. "Rock 'n' roll changed my life. I remember playing a gig at Flushing High School, doing stuff by Humble Pie and Savoy Brown. All of a sudden, all the girls wanted to hang out with you and the guys wanted to be you. It was incredible," laughs Byrd, who is chatting with us from his New York home.

Lifer features 11 original songs written or co-written by Byrd that recall a time when bands like The Faces, Mott the Hoople and Free were all over American radio. "The common ground with everything that I like is that it all comes from soul, R&B and blues. The guys I listened to as a 12-year-old kid turned me onto the really old stuff. I would read interviews with Keith Richards and he would mention guys like Muddy Waters, so I would go and investigate. There obviously wasn't anything like Google back then. You had to go find out on your own."

When Noisecreep tells Byrd that we cranked the album while driving down Southern California's Pacific Coast Highway, the musician is pleased. "Well, if it sounds good in your car, then we're alright. That's a good test. I tried to not over-produce the thing. I wanted it to sound like a band playing in a room together. There aren't a lot of overdubs. That's the key to our whole conversation here: that you liked the way the album sounded in your car. I'm glad it passed the driver test!" 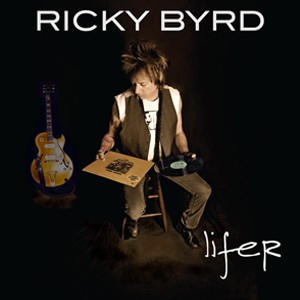 Lifer is available now on iTunes and Amazon.