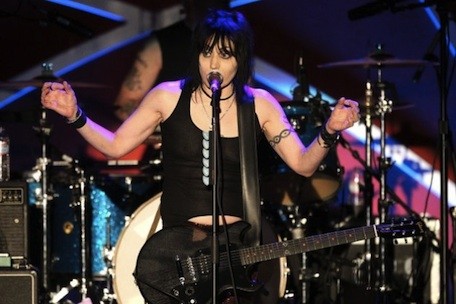 Hot Topic claim they have 11 registered trademarks with the U.S. Patent & Trademark Office to use the Blackheart moniker on various apparel, cosmetics, clothing, and accessories. In a statement issued to TMZ, the youth based retailer denied Jett's allegations. "Hot Topic, Inc. takes the rights of artists very seriously, and has in fact compensated Ms. Jett over the many years in keeping with mutually agreed-upon license agreements," the statement reads. "This lawsuit is a surprise to us, and we are confident in our rights to use the Blackheart brand name."

The suit alleges that Hot Topic approached Jett's record label in February 2010 to design clothing and merchandise related to the brand. It is their assertion that Hot Topic ran with the idea and created their own Blackheart line. Blackheart Records, according to the filing, received their own federally registered trademark back in 1985.

Jett burst onto the music scene as a 15-year-old after forming the female rock group the Runaways back in 1973. Her biggest hit was 'I Love Rock `n Roll' with Joan Jett & the Blackhearts. In 2010, Kristen Stewart played Jett in 'The Runaways,' a look at the rise and fall of the short-lived group best known for the single 'Cherry Bomb.'