Porcupine Tree brain trust Steven Wilson is considered a true artisan by fans of the progressive rock genre. His work in his band, his Storm Corrosion project with Opeth's Mikael Akerfeldt and his solo efforts are always foward-thinking and cinematic in scope, incorporating elements that stimulate all senses.

Wilson talked to Noisecreep about why he chooses to release solo material -his latest is The Raven That Refused to Sing (And Other Stories) is his third album- and why artists of his ilk tend to be a little self-indulgent. He also spoke finding his audience and effectively encapsulated why the progressive rock genre is where he is most comfortable.

What was the catalyst for you to do another solo album? What does it satisfy in you that Porcupine Tree or other joint projects aren't able to?

When it comes to being in a band or going solo, one is collaborative and one is not. But generally speaking, when going solo, I am the boss. People can contribute ideas, but I am the boss. When collaborating, you make compromises and look for a common ground. Two or three people find a common ground and direction they want to go in together. This was an opportunity to bring together all the strands of my musical interests, potentially, into one project. For the first time, I could stand up and say, 'You know what, this is me. You've seen aspects of me in Porcupine Tree and Storm Corrosion, but for the first time, this is exactly what I am about when left to my own devices.'

So how has the reaction been? You tend to be somewhat polarizing since your music is so specific and progressive.

Some people have said that it's part of a continuum of work for them, since they like anything I do, and this is part of that work. Other people have said it's the best thing I've ever done, while others thought, 'Wow, I don't like this at all, go back and do other things.' Inevitably, when you get to this point, where I am, as I've made 50 albums in 20 years with various projects, whatever you do will be divisive in terms of your audience.

Watch Steven Wilson's 'The Raven That Refused to Sing' Video

Like Storm Corrosion, your project with Mikael Akerfeldt of Opeth...

We had an extreme reaction to Storm Corrosion. We were proud of it, but it divided the audience. The metal fans were divided. Some went with it. Some hated it, since it wasn't the progressive metal supergroup they were waiting for.

That's so true. They probably had specific expectations. Do you feel pressure from fans? It's the fans that keep you doing what you do, and no one wants their fans not to like something they do, but...

That's the great paradox of being an artist. To be an artist that continues to produce work, you have to make a living from it and therefore, you have to have a fanbase. The definition of an artist for me is someone who is quite selfish about their creativity. If you want to be an entertainer, you want to please your fanbase and likely work in a different areas of entertainment. The real artists are ultimately people who don't consider their audience and are almost incapable of considering their audience. They can do what they do and fire themselves up.

I am one of those people...but I am quite fortunate to find an audience. But you are right. If you do it in a self-indulgent and selfish way, you gamble with your livelihood. The sign of a good artist is one who can walk the precarious line and doesn't allow the work to become product or part of a sausage machine pumping it out. 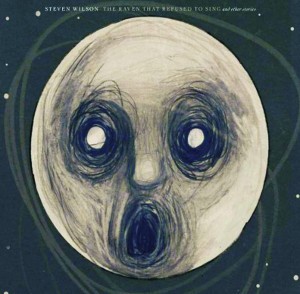 Music appears to be the No. 1 thing in your life, with 50 albums to your credit.But what about other interests?

My projects are pompously multimedia projects. [Laughs] The Raven That Refused to Sing also has a book of short stories, which started from me writing ghost and supernatural stories and using them as a basis for songwriting. There is artwork, film and animation to promote the record and the live show. You can see that my interests go beyond music, by looking at the show, the film projections and the book with the special edition of the record. There are literary aspirations and the show delves into the world of cinema. If I was not a musician, I'd be working in some medium.

To that end, who is your favorite artist?

I tend to like the square pegs, which applies to Frank Zappa, Thom Yorke of Radiohead -- I love how they conducted their career in a willful way. David Lynch, Stanley Kubrick, Orson Welles -- those are all people who went against the system and the way you were supposed to conduct your career. They created their own universes and those guys have been so inspirational to me, giving me strength in a way.

Really, it's about finding your space, express yourself. I admire people when they don't do things. Radiohead is a great example. After OK Computer, they could have been the next U2, but they didn't want that. The next record was bizarre, experimental, electronic, and it was a shock. They turned their back on inheriting the U2 crown and I love them for that.

For someone who may have no frame of reference for your past efforts and your status in the prog rock world, what could you say to corral them or reel them in, to check it out.

If you like music analogous to film or a book, that's a starting point for me. I don't deal with three-minute, self-contained songs. I am not very good at it. I am better at telling stories at over a long time, across an album. I like quiet, loud, happy, melancholic music. Characters develop, and the mood from one scene can change from comedy to tragedy in a minute, which is not what you usually get from pop or rock, but you can! That's what we refer to loosely as progressive rock. I'm good at that -- telling a story over a longer period of time. That is what I've done.

Steven Wilson's The Raven That Refused to Sing (And Other Stories) is out now via Kscope and available on iTunes and Amazon.