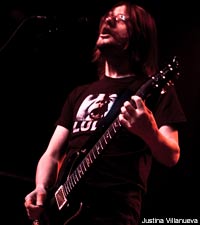 Having a mammoth music collection used to mean something. It spoke of dedication, it was pure geekdom. Now a music collection means you have a lot of digital storage and a good home Internet connection. Sure most of us have less clutter lying about, but there's been a trade off. According to Porcupine Tree frontman, Steve Wilson the sound quality is only part of what's been lost.

"There was something in that magical, romantic, tactile relationship with the album that has been lost by the reduction of music to content," Wilson wrote in a letter to the editor of The New York Times, a response to an article about the missing grand sound in modern digital compression. "Music is not software; music is art. But I've been encouraged by the growing revolt against that iPod culture and playlist mentality."

The prog rock frontman is of course referring to the growing adoration and desire for vinyl, which we at Noisecreep have previously asked bands their own reasons for their love of the big art, big sound format.

"Kids at shows come up to me to have me sign their vinyl," Wilson continued. "They want to feel as if they're buying into something they can cherish and feel a part of. And you simply can't do that downloading a few files."

The British band's 10th album, 'The Incident,' came out last year via Roadrunner.