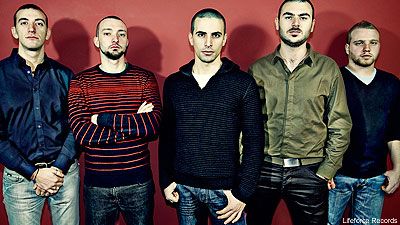 Italian melodic metal band At the Soundawn will release 'Shifting' via Lifeforce on April 27. While this is the band's second album, there is no fear of the dreaded sophomore slump, which affects bands of all size and scope.

"Our debut EP was just a trial," guitarist Andrea Violante told Noisecreep. "We had really limited time in the studio, and we had to patch things up many times. It's quite far from a proper album, trust me. It just ended up being good enough to sign a multi-record deal with Lifeforce. Finally we could say that this last one is actually our first album, so save this question for the next one!"

While Lacuna Coil are the biggest hard rock export out of Italy, Violante said, "There's not a real scene in Italy. It's more like there are separate circles of bands that support each other. And unfortunately, there's no real supportive communication or interaction between these groups. Honestly, even if -- musically speaking -- there are bands not too far from us, I think we don't fit properly in any of these circuits. We are quite a black swan, for better or for worse."

The band's explores an atmospheric, creative sound on 'Shifting,' with Violante saying, "The ambient sound comes from many artists, almost all of them outside the metal scene. Let me name Kaki King, Massive Attack, Elsiane, Minus the Bear, Jaga Jazzist, Radiohead; and on the heaviest side, Porcupine Tree and Katatonia. Probably these influences won't have direct references in our music, but they got a deep impact on our way of approaching -- and eventually writing -- music."

The band doesn't have any current plans to leave the boot and tour the U.S., but that could change sooner than you think. "We would love to," Violante said. "We're waiting for offers, so just come knock at our door!"