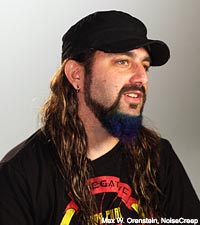 "Along with the TiVo, the iPod is the greatest invention of the 21st century," Dream Theater drummer Mike Portnoy told Noisecreep. "I remember a time not too long ago that when I'd leave to go on tour, I'd have to pack giant CD folders with 100s of CDs to keep me company on the road ... but now I can have my entire library at my fingertips!

Given the size of Portnoy's drive, that leaves plenty of opportunity for interesting or embarrassing 'Your iPod Is Showing' lists. The drummer agrees. "My latest iPod is filled with everything from Abba to Accept, Bee Gees to Black Flag."

Not only does Portney have a list that befits a really good college radio station, he provides commentary to explain and support his list. So here we go. Mike Portnoy, your iPod is showing:

Beardfish -- 'South of the Border'

My favorite prog band to emerge in many years. This Swedish band sound like they are straight out of 1973! And this tune is them at their most Zappa-esque.

Rush meet the Police in the new millennium? These guys consistantly put out quality, musical albums.

These guys have such a great groove and such killer riffs. Love em!

This album came out in the heyday of late-'80s/early-'90s funk, hip-hop rock/metal (Red Hot Chili Peppers, Primus, Digital Underground, Fishbone). It's a bit of an all-star band with Buckethead, Brain, etc.

'70s Scorpions rule!!! Ulrich Roth is a totally underrated and forgotten guitar God. Albums like 'Virgin Killer,' 'Taken By Force,' 'In Trance' and the live 'Tokyo Tapes' are absolutely classic.

This was a favorite live album of mine when I was about 13 years old. I definitely copped some fills from drummer Barrimore Barlow on this one!

A speed metal version of a Nancy Sinatra song from the very first Megadeth album. This version that popped up is from the remixed 2002 reissue which funnily is practically a continous, censored beep throughout the vocals.

Oceansize -- 'One Day All This Can Be Yours'

Awesome band from the U.K. that are probably the best thing out there in the alternative-prog vein of Porcupine Tree. Kinda like if Radiohead were into odd time signatures.

Strange that this popped up back to back with Oceansize, as Riverside are another favorite new band of mine in the same kind of vein as mentioned above. They are a hair less alternative and a hair more metal though. Almost a bit like Opeth meets modern Marillion. They are from Poland and I invited them to support Dream Theater for some shows in Europe in 2007.

S---, I was afraid this would happen. I hate when stuff I played on pops up on shuffle. Well luckily, I cannot get enough of Neal's music. Regardless of having recorded nine studio albums together (three with Transatlantic, five Neal solo albums and one covers CD), Neal is hands down one of my favorite song writers of all time. Absolutely one of my 'desert island' artists, and hearing this amazing song again just totally pumped me up.

The Flaming Lips -- 'Halloween on the Barbary Coast'

This is an early Lips album. They were a little rawer and more punk back then. But they would eventually mature into an incredibly daring act and I think they've created some of the most amazing sonic tapestries of the last decade.

OK ... '80s hair metal ... sorry! Strong high clean vocals (James LaBrie was surely a Tony Harnell fan) and great shredding guitar. But yes, it does sound a bit dated in the middle of this shuffle.

Along with Lennon/McCartney, Roger Waters and the aforementioned Neal Morse, Pete Townshend is one of my favorite songwriters of all time. He is one of the few musicians left in the world that I've always wanted to meet and still haven't. When I was at the Classic Rock Awards in London this past month, he was sitting at a table across the room from me but managed to escape before I got my photo op ... damn!

I really got into these guys after seeing the amazing DVD 'I Am Trying to Break Your Heart' ... absolutely one of the best rock documentaries I've ever seen. Should be mandatory viewing for any band trying to make it in this crazy industry.

This was the early '80s supergroup with Fast Eddie Clarke from Motörhead, Pete Way from UFO, Jerry Shirley from Humble Pie and a new vocalist (and Robert Plant sound-alike) Dave King. This is a classic debut album. I saw them open for Iron Maiden on the 'Piece of Mind' tour. If you close your eyes and listen to this song, you'd swear your are hearing an unreleased Led Zeppelin track!

A cliché? perhaps. Played out? I suppose. One of the greatest rock 'n' roll songs/anthems ever written? Absolutely!

It doesn't matter how many thousands of times I've heard this, when it comes up in a shuffle, I never skip it!

Steve Vai is hands down one of my favorite guitarists of all time. I've had the pleasure of touring with him many times through the years on various G3 tours. This particular track happens to be one of my favorites of his (along with 'The Attitude Song' and 'Blue Powder') So many twists and turns and such incredible musical depth. He also is one of several musicians around today that is keeping the spirit of Frank Zappa's music alive and well.

This is from the first album of the '90s Bush era. (That sounds so political -- should I say the Bush Administration?) I love everything Anthrax have ever done, and I go way back to the beginning with them as I've been listening to them since the days of seeing them play at L'amour in Brooklyn back in 1984. They are all good friends of mine and I know they still have some kick ass albums in them. Can't wait!

Michael Weston King -- 'For No One'

I must admit, I don't know this artist. This is part of Mojo magazine's great series of Beatles 40th Anniversary re-recordings that they've done for 'Revolver,' 'Sgt. Pepper,' 'The White Album' and 'Abbey Road.' My iPod is filled with literally hundreds (perhaps thousands?) of Beatles covers. I love collecting them (and other misc. covers as well). Although they are never as good as the originals, they are always interesting to hear.