Last year, revered former 'Metal Maniacs' magazine editor Jeff Wagner released 'Mean Deviation: Four Decades of Progressive Heavy Metal,' an exhaustive history on the sound and its various subgenres. Featuring artists like Rush, Opeth, Celtic Frost, and Dream Theater, Wagner does a wonderful job walking the reader through prog-metal's four decade plus history. In last year's Noisecreep Gift Guide, we described the book as "an expertly researched love letter to the largely misunderstood and often maligned progressive metal scene." Since Wagner is the preeminent scholar of the genre, we asked him to give us his list of the 10 best progressive metal albums of 2011. Luckily for us, he said yes.

'The Ghost You Gave to Me'
3
"With their fifth full-length (sixth counting the 'Revisions' re-recording album), 3 maintains and hones their genre-juggling approach. It's pop, it's prog, it's metal, it's alt.rock, it's new wave. Never novelty and always awesome, so far. Between Joey Eppard's soulful vocals, guitar playing and compelling lyrics; the under-utilized but still colorful guitar work of Billy Riker; and one of the world's most underrated drummers, Chris Gartmann, 3 is just about untouchable at this point. Unless you hate completely awesome melodies and top-notch song craft -- and why would you?"

Amazon
'Arrows & Anchors'
Fair to Midland
"So, the production is a compressed "loudness wars" mess (although we've heard much worse), and this for a band whose earthy, almost rootsy earlier productions worked so well with their down-home fairy tale art-folk/prog/metal. Yet, YET!!!, they pull through with loads of character, and songs that are more individualistic than their previous album, which was full of great songs but all kind of ran together as one. Theirs is a special sound, comparable to no one, but nestled somewhere in that same family of modern art-rock bands such as 3, Coheed and Cambria, and Dredg."

Amazon
'Chuckles and Mr. Squeezy'
Dredg
"Talk about splitting your fanbase. This album was and remains a controversial directional shift for a band who could have never been expected to remain creatively static. Once past the Dan the Automator production (which is gorgeous, you haters), you hear the organic foundation of these songs, and these songs are BRILLIANT. The paranoid creep of "The Tent," AM radio-influenced ballad "The Ornament", and quietly defiant opener "Another Tribe." The end of the album throws up intriguing question marks: the rumba-ready, Roy Orbison-ish "Where I'll End Up" and b-movie Western-ish closer "Before it Began." I'm on board with this new Dredg direction, even though they'll probably reel it in and be more Dredg-ish on the next album. If that's the case, 'Chuckles and Mr. Squeezy' was a welcome and rewarding detour."

Key songs: 'Another Tribe,' 'The Tent,' 'The Thought of Losing You'

Amazon
'Heritage'
Opeth
"Another album that threw a fanbase into frenzy. Seriously, what's with fans of inherently progressive bands getting upset when that band changes direction? And is 'Heritage' really all that different? They were moving toward an album like this the whole time. There are no death vocals, but so what, there weren't any on 'Damnation' either and hardly anyone complained. The production is a super-earthy, '70s-ish thing of great warmth and dynamism. Song-wise, and also vocally, it's Mikael Akerfeldt reaching another peak. The rhythm section (bassist Martin Mendez and drummer Martin Axenrot) also step it up on this album, shining in a bit of a different light. Man, this thing would have been PERFECT had they let the album fade away with the excellent final moments of "Folklore" (closer "Marrow of the Earth" feels superfluous)."

Amazon
'Sympathetic Resonance'
Arch/Matheos
"Fates Warning album #11, although some business dealings nixed that whole idea (and Ray Alder was fine with it, giving his OK to the project). Jim Matheos, John Arch, Frank Aresti, Joey Vera, and Bobby Jarzombek, all of them Fates alumni. Whatever it's called, the album finds Matheos writing the most complex compositions of his career, the three tracks that clock in over 10 minutes being vast labyrinthine things, while the more easily digested shorter songs still carry plenty of nuance and magic along with them. Arch's vocals, which you either love or hate, shine incredibly bright here: power in the upper range and truckloads of character in each syllable. Way better, more energetic and more inspired than most albums comprised of such seasoned metal vets."

Amazon
'17th Street'
Hammers of Misfortune
"John Cobbett is one of the truly great songwriters in metal, drawing inspiration not only from classic rock, prog and '70s/'80s metal, but from people like Bob Dylan and Andrew Lloyd Webber. Hammers of Misfortune's music has always been a stew of varied ingredients, sometimes achieving greatness, sometime not so tasty, but always interesting. '17th Street' is easily on par with the band's other masterpiece, 'The August Engine,' and the first half of the album is especially amazing, song after song of some of the best, most original, most memorable metal you've heard in ages."

Amazon
'Bilateral'
Leprous
"Previously better known as Ihsahn's live backing band, 'Bilateral' is like a protege that matches and possibly even trumps its master. One of the most cutting edge albums ever released on prog-centric label Inside Out, yet entirely listenable and song-based, this album by the young Norwegians is a colorful, riotous, ecstatic delving into the guts of the corpse of metal. If metal is dead, this is its afterlife. One foot in traditional Prog Metal fireworks, one foot in modern aggro-art-metal, and a third foot (hey, it's a strange beast) in whatever it was that Faith No More did all those years ago." 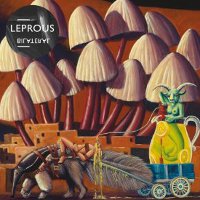 Amazon
'Svartir Sandar'
Solstafir
"This album gets my "Gobsmacked By a Band I've Known Existed Forever but Never Heard Until This Year" award. (It's a prestigious award, I swear). My first thought upon hearing 11-and-a-half minute opener "Ljós Í Stormi" was, "oh, WOW." Five minutes in, it was "oh my god," and 10 minutes in, "Fucking WOW." Huge, monolithic, epic sound, as vast and icy as their Icelandic homeland, as bright as sun on snow, as passionate as music can be. Fairly repetitive, too. It's not that things never change here, they do, they just change very, very slowly. And that's part of its appeal. It just about stops time. Imagine Neurosis emitting more emotion and less aggression, and being more accepting of melodies. I guess it can be called post-pagan metal, too, since they used to play metal more in line with Longship Black Metal (aka Viking Metal) and have evolved into the incredibly welcoming thing they are now. There aren't many double albums that can sustain interest all the way through, especially music as dependent on hypnotic repetition as this, but, well, I can't wait to listen to it again. In full."

Amazon
'Carbon-Based Anatomy'
Cynic
"Along with this year's Dredg and Opeth releases, this little 6-song nugget received as much scorn as praise. I'm on the praise side of the equation, not because Cynic always gets a free pass, but because this material is inspired and inspiring, and who really cares of it's tech metal or not, or if they're already too far away from 'Focus' or not? I don't know what to call it, but as with so much genre-less music, who really cares? It's comforting, it's transcendent, it's played by musicians who aren't ripping along in a sea of directionless chops, rather preferring to play to the strength of the song, and that's much more impressive."

Key songs (easy, as this is built of three segues and three proper songs): 'Carbon-Based Anatomy,' 'Box Up My Bones,' 'Elves Beam Out'

Amazon
'Grace for Drowning'
Steven Wilson
"The Porcupine Tree leader (and key member of Blackfield and No-Man) has absolutely no business writing and recording music this interesting and vital this far into his career. Who does that? Wilson does, apparently. One of the most talented musicians on the planet, 'Grace for Drowning' unfolds with more cohesion and direction than his first solo album. It's modern prog/art rock, if you have to call it anything, but ultimately it's music you can crawl into and explore for hours on end. Fascinating stuff."