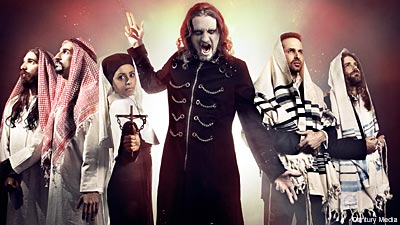 Israel's Orphaned Land will be playing four North American gigs -- two in the U.S., two in Canada -- beginning in March. They will be supporting Suidakra. The shows will be 'events,' since the band rarely is able to tour the continent. While it's a handful of dates, vocalist Kobi Farhi enthused to Noisecreep, "We hope to get more shows! I hereby call all local promoters to contact our booker. I can't wait to meet our American fans! If we are already there -- the more, the better, I hope the tour will end up with many more shows."

The band played the Prog Power Fest in Atlanta in 2009, and Farhi remembered, "American fans being very much devoted, amazing music people and I can't wait to meet them all again!"

Orphaned Land will undoubtedly be performing songs from their fourth effort, 'The Never Ending Way of ORwarriOR,' which is out via Century Media on Feb. 9. Porcupine Tree visionary Steven Wilson mixed the record and contributed several keyboard parts.

"We are fans of Steven Wilson and Porcupine Tree and sometimes we still cannot believe that he actually involved in our album," Farhi said. "It was amazing and flattering just to know that he wanted to work with us. I assume he found the mixture of progressive music and Middle Eastern instruments fascinating. For music such as ours, which is very complex and diverse, it is important that it'll be produced and mixed the right way, and that's why he was such a great added value to this project. The keyboards he is playing, the sound of guitars, drums and what he did with my vocals and the small fazing effect is just genius."

The tour dates for Orphaned Land are as follows: