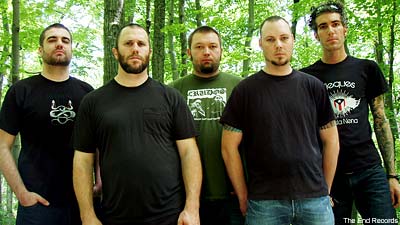 Cable have never been a band who's actions are easy to predict. But back in 2006, when the band released the 12-year retrospective CD/DVD 'Last Call' and called it quits, everyone figured that Cable's unique mix of sludge, murk and loud was never to be heard again. Everyone was wrong, because Aug. 18 will see Cable release the full-length 'The Failed Convict,' at the hands of The End Records.

"The music just lives in our bones," drummer Vic Szalaj told Noisecreep, when asked why the band returned. "It's not easy to say f--- it forever. We did it again for the right reasons this time, we all got along and we knew we had to do it."

For this return, Cable headed from Connecticut to Studio G in Brooklyn to have Joel Hamilton (Unsane, Tom Waits, Dub Trio) be the wizard behind the knobs. This time around, the band went into the recording process a little different. "Normally, we book studio time with one or two tunes written. Then we write songs right up until the moment of recording," Vic explains. "This time it was the opposite, we had the songs written 99% before we booked time. We really put a lot of effort into making it the best possible album we could produce."

Of course a question remains, will Cable hit the road and shake the walls of a bar near you? Yes, but only in the form of small weekend jaunts for the time being. Vic says, "We hope to do more but we have learned over the years not to over extend ourselves because of other commitments in this life but we will do our best to go where people want us, that's why we do this, to exercise ghosts in towns where they need an exorcism."