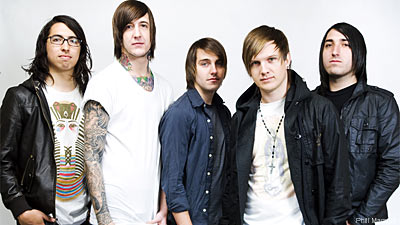 Southern California screamo-metal band Of Mice & Men have announced a parting of ways with singer (and co-founder) Austin Carlile. In statement the band cited unnamed personal issues as stopping Carlile from the "high demands of touring full-time." The band, which just released their debut album just last month, has tapped Jerry Roush (ex-Sky Eats Airplane) as the new frontman. Carlile, who many will remember left Attack Attack! abruptly after the metal-core band's debut album released. This quick departure has left many fans stunned and a little angry at both the band and Carlile for varied reasons, but he has actually been open that his departure has been a matter of life and death.

Via his tumbler Carlile has pleaded for fans to quit voicing anger at the band and at him. "I'll make something new soon. I promise. So no worries there. You'll all meet me on tour one day, but ... In the mean time I just wanna get my health together, listen to Whitechapel and Drake, eat PF Changs, share amazing moments with my wife ... simply enjoy living life."

The health reason taking him off the road comes back to a diagnosis he received when he was 18. Marfan Syndrome, a disorder of the connective tissue, which actually led to his mother's passing, involves constant testing to check the severity of and monitor the damage it does to the heart valves and cardiovascular system. Carlile has been updating the concerned regularly of the details of his constant doctors visits, blood work, echocardiograms and X-rays. He has even included photos of the heart monitor he has to wear. Seven days ago, he updated with excitement of going to a cardiac surgeon.

We here at Noisecreep hope good news is on the horizon for the singer and he continues to grab life as he sees it.