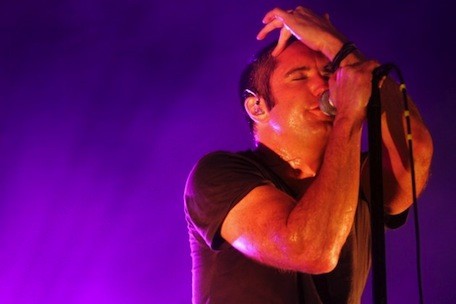 2013 is the year that Trent Reznor got his groove back! The Nine Inch Nails mastermind waited until the midnight hour Wednesday night (June 5) before officially marking his band's return with the single 'Came Back Haunted.' Earlier in the night, he used Twitter to reveal the album title and release date of Nine Inch Nails' forthcoming album as well.

The disc will reportedly be called 'Hesitation Marks' and is now on the schedule for a Sept. 3 release date. Reznor recently revealed that the slow burn return of his band since he reactivated the project was due to the fact that he'd been secretly working on a disc with Atticus Ross and Alan Moulder over the past year. Now that record is on the schedule and will be released by Columbia Records and fans are getting a chance to digest 'Came Back Haunted' as the first piece of new music from Nine Inch Nails in several years.

The track itself finds Reznor and the band really vibing off an electronic groove that builds in tension before delivering 'The Hands That Feeds' pacing toward the chorus. Even with an upbeat vibe, there's still a sense of that Reznor darkness and paranoia within the lyrical content.

Listen to the new Nine Inch Nails song 'Came Back Haunted' in the audio player below.