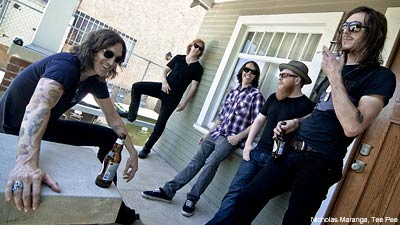 Night Horse is fueled by the dual guitar attack of Justin Maranga and Greg Buensuceso. Playing New York's Pianos the night of Les Paul's death, the California band dedicated a song to the electric guitar inventor and innovator, saying they wouldn't be on stage without him. Maranga's first electric guitar was a Les Paul, which he got when he was 12. And he plays Gibson Les Pauls exclusively in Night Horse.

"Less than the specific model Gibson Les Paul, Les Paul was at the forefront of the creation of the electric guitar, and I wouldn't be doing what I do without him," Maranga told Noisecreep. "The story goes that at a young age, he heard a window vibrating when a train went by, and he got curious and asked his teacher why that was. And she explained the idea of sound waves and how they could vibrate the window. From there on, that spark in his mind created the electric guitar. A mind like that, and a player like that, 94 years old, playing every week in New York -- you can't f--- with that. His influence stretches far beyond the Les Paul model and on to all electric guitars."