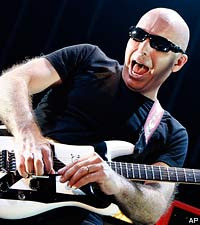 Instrumental guitar virtuoso Joe Satriani had already released three solo albums, including the award-winning 'Surfing With the Alien' when Epic records invited him to interview Les Paul to help promote one of the legendary inventor's compilation albums. A longtime fan, Satriani was looking forward to the conversation and prepared extensively for it.

"We were on the phone for two and a half hours," Satriani tells Noisecreep. "And when I got done, he said to me, 'Well, you know a lot about music, Joey. You outta think about getting into the music business one of these days.' I remember thinking, 'Is he joking?' I had no idea if he knew who I was. But since he was Les Paul, I didn't want to say, 'Hey, do you know who I am?'"

Less than a year later, Satriani finally met Paul when they both took part in a week-long Guitar Legends festival in Seville, Spain. Still unclear whether one of his heroes knew who he was, Satriani was determined to talk to Paul about music and playing. "I was thinking that I've gotta impress upon him that I'm also a guitar player," admits Satriani. "It was so funny, but then of course when I met him, he completely disarmed me with his charm, and as soon as you shake his hand, you go, 'Oh, this is a very special human being.' He makes you feel like you are instantly his best friend."

But that wasn't the extent of Satriani's time spent with Paul. "Last October, I got a chance to hang out with him again for this interview and photo session that Zakk Wylde was also a part of -- and then to play with him later that evening at the Iridium club. And by then," Satriani adds. "I knew that he also had this extremely humorous side to him. And when you walk onstage with him you never know what's gonna happen."

In 2005, Satriani got the opportunity to play with Paul at his 90th birthday at Carnegie Hall in New York. The musicians jammed onstage and Satriani was impressed the legendary guitarist still had "great timing and sensibility," not to mention that killer sense of humor.

"He played all these techniques that he invented and pioneered, and then he had me up there and we engaged in this humorous banter," Satriani remembers. "He asks me about this guitar Ibanez 'Surfing With the Alien' anniversary guitar I was playing. He seemed interested in it, and I just happened to say, 'It's got this bar here and I can do this,' and I made one of these crazy screaming noises. And without missing a beat, he just says into the mic, 'Well, that's too bad.' He cracked the whole place up, and I felt like it was a great honor to have him joke about me like that. That's part of what I remember about him. He could use you for a joke and make you feel so loved at the same time.

"He had this life that was bookmarked by these crazy disasters," Satriani explains. "When he invented the idea of pirate radio, just as it was strong, he electrocuted himself in his basement in New York and that put him forward into another chapter of his life, inventing the multi-track tape recording, building up his music with his wife. Then they finally get their TV show and they buy a house and they're driving out there and he gets in a car accident and breaks his arm and they have to set it in a way that he'll still be able to play guitar.

"But as he's explaining these chapters of his life, he's laughing about it, and he's looking you in the eye and transmitting humanity to you. It wasn't just him telling you stories. You really felt like he was including you in his life when he sat down and talked to you and he wanted you to walk away with something special from the encounter. He was amazing that way."