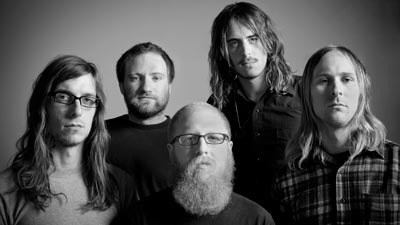 There's a bit of an interesting twist to 'The Trial,' a track from Los Angeles-based psychedelic doom rockers Ancestors, which we here at Noisecreep are proud to be able to bring to you, ahead of the release next week of the band's sophomore LP, 'Of Sound Mind.' It's an epic monster that fans of bands like Neurosis, King Crimson, the Sword and even Pink Floyd will appreciate. The twist involves guitarist and frontman Justin Maranga. The dude's a paralegal who is two semesters away from earning his law degree.

'The Trial' -- he's in the legal field ... get it? Now, we know that was a lame pun, but this song is not. Ancestors don't mess around, bringing the riffs, the ambient noise, the strange atmospherics and the psychedelia all together in one juggernaut of a number. Clocking in at over 17 minutes long, Maranga's vocals don't even come in until just after the 11-minute mark. So if lyrics are you're thing, just hang in there.

"We've been reluctant to open our sets with that song," Maranga tells Noisecreep. "We were talking about opening the record with it, and I was like, 'Wait a minute ... there's no vocals until after f---ing 10 minutes. We probably shouldn't open it with that song.' But, it was the first song we wrote, of that crop of songs, so it still has elements of the previous record ... but if you look at it in the progression of the order that we wrote the songs, it was definitely a signpost for where we were going, I think, and I think that's constantly what we're doing. Each song has elements that kind of foreshadow what's coming next, because we tend to kind of get excited about some element of the next song, and so the songs are so monumental for us ... we only have seven songs in our whole repertoire. Every song is such a big deal for us, a new step in the progression of wherever it is we're going."

Listen to 'The Trial'

'The Trial' is the longest song on 'Of Sound Mind,' with three others clocking in at almost 14 minutes. Maranga likes to think Ancestors' songs hold the listening, and that they "don't get boring, because they keep moving. I feel like, on the new one, the songs keep moving and they take you somewhere, and you're not just sitting in the same spot for 15 minutes, listening to the same song ... I mean, it is the same song, but hopefully, the songs don't feel like they're 15 minutes long."

Because Maranga is in law school, and because ours is an era in which most people can't step away from their desks for five minutes without getting fired, Ancestors isn't as much of a touring band as they'd like to be. But this summer, after graduation, Maranga hopes to be able to spend the summer on the road. He's going to law school because ... well, it's his backup plan. While he is in two bands (Ancestors and the classic rock-leaning Night Horse), they're two bands that aren't making the kind of music that tops the charts.

"Law school is about as far ahead as I planned, and I'm in my last year. And I still don't know what the hell I'm going to do with myself," he says. "I'm getting out of here with a good degree, is how I see it. And if nothing else, I'm already basically the band's lawyer. I've handled every legal aspect of both band's I'm in."