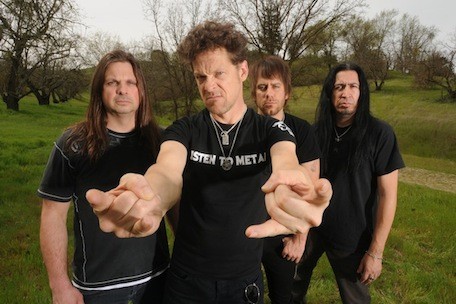 Jason Newsted teased some great hard rocking music earlier this year with the release of his self-titled band's 'Metal' EP, but that was just the beginning. Brace yourselves and strap in as Newsted are back with new album called 'Heavy Metal Music' and a propulsive new song called 'Heroic Dose,' as heard below.

The bassist-turned-frontman for this project revealed his new album plans via the NewstedHeavyMetal.com website Tuesday (June 4), with the chugging, aggressive rocker 'Heroic Dose' getting a prime spot on the front page. The song clocks in at over five minutes of hard rock bliss, with guitarists Mike Mushok and Jessie Farnsworth really driving the track.

In addition to the new song, Newsted also revealed the full track listing for the 'Heavy Metal Music' album. Fans will notice that 'Soldierhead' and 'King of the Underdogs' both carry over the 'Metal' EP.

Newsted, who initially had planned for a series of EPs, told Loudwire earlier this year that of the first 11 songs he had in mind to release, only five or six became contenders for the full-length album. He added, "So out of the 21 songs I've written since October, we're gonna end up sharing maybe 15, including the EP."

The frontman also stated that Newsted has become a more collaborative effort over time and he's thrilled with the current lineup. "[The songs] were all my seeds, but now that we have Mike Mushok in the band and I give the music to all three of those guys, now I have three great artists bringing back their responses and their counterpoint playing to my ideas," says Newsted. "So it's becoming more and more collaborative everyday and on this LP there will be shared writing credits on at least half of the songs with the writing credits now."