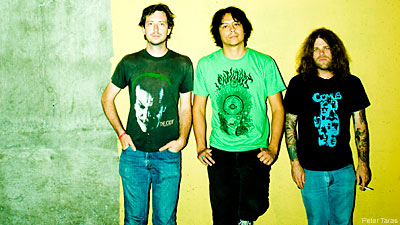 Those damn Europeans. They love metal, so they get some of the best metal tours. Not like we don't get good tours here in the good ole U.S., but some of those Euro tours are worth severing a limb for. Earthless, whose members boast résumés impressive enough to make you turn pea soup green with envy -- like Rocket from the Crypt, Hot Snakes, Blackheart Procession, Nebula and Drunk Horse -- are headed across the pond to enjoy a two-week trek with Russian Circles. The tour includes a stop at The Roadburn Festival in Tilburg, Holland.

Earthless and Roadburn, which is a celebration of crackling guitars, distortion and the almighty riff, have quite the history together, with the band releasing a double CD/LP, dubbed 'Live at Roadburn,' in October of 2008 via Tee Pee Records. The release documented the band's 'right place, right time' main stage appearance at the festival in front of 2,000 fans.

It was a strange switch up, since Earthless were originally scheduled to headline the 200-capacity Batcave. But when the headlining band didn't employ their two-hour Roadburn slot, scrambling promoters and organizers were left with a gap that Earthless happily elected to fill. The show was epic and once the band heard the recordings, they were left with no choice but to release it.

We'll wait as patiently as we can for our U.S. Earthless dates!