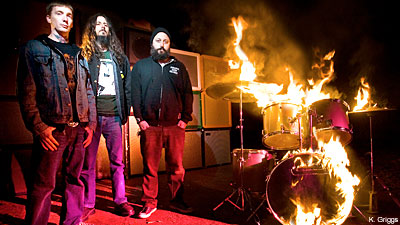 STORMING THE GATES: Alright amplifier worshippers, prepare thyselves for a doom connossieur's dream tour. Atlanta's Zoroaster will be hitting the road in August for a fortnight of raucous riffs, titanic tone, and pounding percussion with Indiana's The Gates of Slumber and Belgium's Serpentcult. The former and the latter both have new wax-- Zoroaster released 'Voice of Saturn,' their second proper full-length, on March 1 and Serpentcult dropped 'Weight of Light' back in January. Both albums are worthy of your attention; Zoroaster's for its more experimental take on that band's signature doom sound and Serpentcult's for its massive riffs and commanding female vocals, a timbre not often heard in doom. The tour routing hits parts of the Midwest, east coast, and Canada.

A CURIOUS COMBO: Miami's Torche will hit the road with-- of all bands-- progressive alternative (now there's an odd word combo) rockers Dredg for US dates in April and May. The unlikely pairing will also be joined by sample-employing post-rock trio From Monument to Masses. Torche's touring partners may not be 'amplifier worshippers' per se, but anyone who's experienced the thunder of their signature 'bombstring' in a live setting knows that Torche certainly are. The band, whose 2008 LP 'Meanderthal' was received with open arms by critics and fans alike, recently released a twelve-inch 'single' featuring two of 'Meanderthal's' standout tracks-- "Healer" and "Across the Shields"-- and two new ones-- "Mash It Up" and "Sugar Glider," the latter of which you can stream over at Pitchfork. When not touring, the band has been working on material for a new record, bassist Jonathan Nuñez recently told Noisecreep.

ON THE RISE: Brooklyn's Naam are the latest addition to Tee Pee Records' ever-growing, ever-badass roster. The band can best be described as heavy psychedelic stoner rock (with a few surprises along the way) and will certainly please fans of Dead Meadow, Black Angels, Om, and Black Mountain. Naam's debut EP, which will be self-released on double vinyl, is due this summer and a full-length through Tee Pee will follow later in 2009. In the meantime, spark one up and check out some jams.