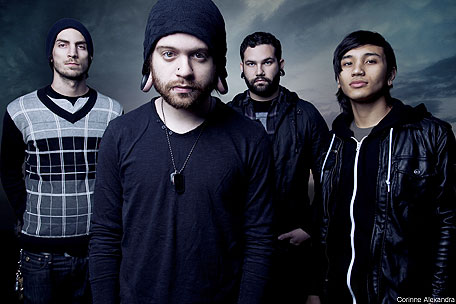 Stuff gets creepy in MyChildren MyBride's 'Terra Firma' video, which Noisecreep is proud to exclusively premiere right here. Shot in grey and black and white tones, the clip might remind you a bit of 'The Blair Witch Project,' with its starkness. There are only a few splashes of color -- such as the flame-haired girl who is prominently featured -- and the electrifying breakdowns erupt like landmines as the band slays, er, plays, with plenty of grime and five o'clock shadows.

"Dave Brodsky filmed our video for 'On Wings of Integrity,' so when we found out we were doing another video for 'Terra Firma,' we were stoked to work with him again," vocalist Matthew Hasting told Noisecreep. "Finding the setting for the video took almost as long as making it. We searched all over Western Massachusetts for a dark, grungy spot to film and after scavenging through abandoned buildings, dark alleyways, garages and basements, we finally found the perfect spot!"


But perfect certainly wasn't easy to come by. Hastings continued, "One of the places even said if we filmed there we would have to sign wavers saying they weren't responsible for anyone getting hurt. Something about the roof maybe falling in? It was nuts!"

After the band found the coveted, crucial spot, set up for the shoot began and was a relatively quick process. "While that was going on, we were getting dirtied up for the shoot! You would think looking grungy and dirty would be easy for us, seeing as we tour 300 days out of the year, and rarely shower. But it's not that easy! After trying multiple combinations of baby powder, makeup and other objects, we found the right mix for our moldy look!"

The biggest anomaly of the shoot? It's efficiency. Video shoots are often all-daylong affairs, but such was not the case with 'Terra Firma.' Hasting said, "We only ended up filming for about three or four hours, which is fairly short compared to most video shoots which can take days."

Overall, danger and dirt aside, Hasting reveled in the fact that "the experience was definitely different than the other music videos we've done: new smells, new camera tricks and a whole lot of fun. I hope you guys like it!"

Get dirty with 'Terra Firma' now. 'Lost Boy' is also out now.