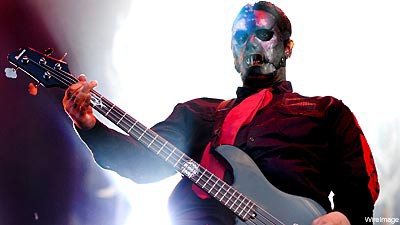 "Paul Gray was always super-fun to be around," Anthrax guitarist Scott Ian told Noisecreep the day after the Slipknot bassist's body was found in a hotel in Urbandale, Iowa. "He was always smiling and he was always all about the music."

Ian spent time rehearsing with Gray in 2005 for the 'Roadrunner United: All Stars' tribute concert to celebrate Roadrunner Records' 25th anniversary. He also played the Black Tooth Bash with Gray in 2007 to honor the life of late Pantera guitarist Dimebag Darrell. "He and I were the main rhythm player and bass player for that band," Ian told Noisecreep. "I got to spend a lot of time with him just jamming, which is what we both loved to do. We'd just get such a kick out of learning riffs. It was always all about the music. He just seemed like he was really that dude who just loved to play his instrument. I'm really gonna miss him."

Many other musicians and industry insiders are also paying tribute to Gray, who co-founded Slipknot with percussionist Shawn 'Clown' Crahan in 1992 and was one of the main songwriters of the band. Mark Abbattista, the manager of Hail! -- the supergroup that features Tim 'Ripper' Owens (ex-Judas Priest), guitarist Andreas Kisser (Sepultura) and Paul Bostaph (Testament) -- was completely shocked by the news of Gray's death largely because the bassist was looking forward to replacing Dave Ellefson (who left to rejoin Megadeth) in Hail! and was excited about the upcoming birth of his child.

"I spoke to Paul over the weekend, and we had a great conversation," Abbattista said. "He was so upbeat and excited as we discussed all our final gear and travel details, went through our new set list and joked about the most fun way to 'unmask' him on stage. We were so looking forward to playing with Paul on our upcoming tour and this is a complete tragedy. We are all in a state of shock and our heartfelt condolences go out to [Paul's wife] Brenna, his family, Slipknot, their management and all his friends. This is a horrible loss and a very sad day."

Said Ellefson, "I was very shocked and saddened to hear of Paul Gray's passing. I considered him an incredible songwriter, inventive bassist, but more importantly a kind and warm friend. As a fellow musician, I was excited that he would be playing in Hail! this coming month as I knew it would be a fun experience for him. I'm sad that the European audiences will not get to see him play those shows. I extend my condolences to his family, to Slipknot and their management, as well as his many friends and fans who loved him around the world. He was another one of the 'good ones' in our business ... a wonderful man who will be missed by us all."

In a recent video conversation, Korn guitarist Munky expressed his condolences. "I wanna send my love to his family and the band going through a very, very hard time right now," he said. "Paul just came to see us play when we came through Des Moines. I'm speechless. I just want to send my love, prayers and respect to everyone that is surrounding his wife and his baby to be."

Hatebreed frontman Jamey Jasta said Gray's contributions to music can't be underestimated. "Paul was a stand-up guy and a great musician. He and Slipknot changed the face of rock music as we know it. Just about every metal band member from 1999 onward owes him a salute."

Jasta's bandmate, bassist Chris Beatie concurred. "He was a great guy and an amazing bass player. I consider it an honor to have gotten to know him. His contribution to the music world was enormous and will live on forever. R.I.P."

Lamb of God guitarist Mark Morton first met Gray on a press trip to New York in 2005 before his band toured with Slipknot, and the two quickly became friends. "I'm so crushed," Morton said. "[It was great] sharing stages and good times with him and the boys around the world. He was a great musician, an underrated songwriter and a truly warm soul underneath the evil mask he rocked on stage. This is a huge loss to the metal world. He will be missed deeply."

Added the members of Hellyeah: "He was a great friend and a craftsman of one of the most compelling metal bands in history. Our thoughts are with his family, his bandmates and his countless fans and friends around the world."

Machine Head, too, issued a heartfelt statement: "We are extremely saddened to hear of Paul Gray's passing. Slipknot are longtime labelmates, peers, friends, tourmates and metal brothers. Paul was a great songwriter, bass player and a genuinely nice person. Our paths have crossed many times since we all first met at Indigo Ranch Studios in 1998. He will be missed by all of us, and our hearts go out to our brothers in Slipknot and Paul's family."

Engineer Colin Richardson -- who mixed Slipknot's 2008's 'All Hope is Gone,' their 2005 concert record, '9.0: Live,' and two of their DVDs -- expressed his deepest sympathies for Gray's family and everyone in the Slipknot camp. "We, as so many, are in total shock over this terrible tragedy. Our love and respect for Slipknot and their team goes back many years now."

Sepultura, one of the first band's to make a statement, kept it short and to the point. "RIP Paul Gray, we're shocked and very sad. This is another tragic loss for our metal community."

Madison, Ala. quartet MyChildren MyBride, one of the new breed of bands combining hardcore and extreme metal expressed their sadness and revealed that Gray and Slipknot were major influences on their combination of chaos and melody. "Paul will be greatly missed by all of MyChildren MyBride," vocalist Matthew Hasting said. "Their music has, and will continue, to inspire us in everything we do."

Gray is survived by his wife Brenna and his mother, who placed the call to Gray's room to see if he was there.