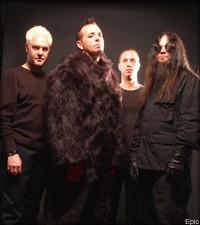 Illinois rockers Mudvayne are giving fans a taste of the retro metal sound they can expect more of when the band releases its self-titled fifth studio album in December. The first single, 'Heard It All Before,' is an unrestrained, riff-heavy track that frontman Chad Gray tells Noisecreep is about "the frustration and danger of being human."

The band members found their inspiration for the skull crushing tune by leaving civilization and seeking isolation at Sonic Ranch studio in Texas. "It was a great studio space but as usual we go into complete isolation mode when we record," Gray tells Noisecreep. "If you needed some t.p., it was an hour and a half round trip ... but on the flip side we've recorded in Chicago where everything is readily available, and I think I wrote two lines a month."

You can also check out Mudvayne's new single 'Scream With Me' exclusively on Noisecreep.

Listen to 'Heard It All Before'

Filed Under: mudvayne
Categories: Exclusive
Comments
Leave A Comment
Back To Top