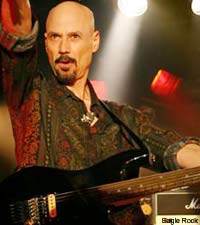 In 1977, 'Bat Out of Hell' was the biggest rock album across the globe. Sung dramatically by Meat Loaf and written by Jim Steinman, the seven-song rock 'n' roll opera remains one of the biggest selling albums of all time. The material's stylistic breadth and technicality needed to be played by top-notch musicians for a tour to ever work.

Meat and Steinman did just that when they assembled a crew of players dubbed the 'Neverland Express,' which featured the guitar team of Bob and Bruce Kulick. Most of you will know Bruce from his days playing with Kiss and Bob is a veteran musician, producer and songwriter in his own right.

Meat Loaf has just released 'Bat Out of Hell: The Original Tour,' a DVD that captures the raw and boundless energy of that 1977 tour. Noisecreep caught up with Bob Kulick and asked him about his memories of that time period.

You played on Meat Loaf's infamous 'Bat Out of Hell' tour as part of his Neverland Express band. How did you hook up with him and Jim Steinman and were you a fan of the material as soon as you heard it?

Joe Stefko, the drummer, and I had worked together with John Cale so Joe was actually the first one hired and he suggested me. I had seen Meat and Jim Steinman perform at a small club before that.

Just the previous year I had played with Alice Cooper as a fill-in for Steve Hunter. It was on Alice's Australian/New Zealand tour so I was hip to the show aspect of what Meat Loaf had in mind. As for the material, I recognized that they were all great songs but I wasn't a fan of them at first.

Were you able to inject your hard rock influences into the arrangements at all?

Bruce and I heavied them up wherever we could adding twin guitar harmonies and additional licks and solos. It came down to whatever we could get away with (laughter). Just check out the instrumental section in 'All Revved Up' for a better idea of what I'm talking about.

Through the years the stories about this time period of the band are legendary. But what do you remember most about those days?

What I remember most is how we went from getting booed off the stage to being the biggest act in the world! Another thing I take from the memory is how great the band was.

Did Meat's size ever become an issue in terms of his performance? The physicality of the singing coupled with the Broadway-like stage show must have been taxing on him.

He collapsed a lot and got sick often. So yes, he had a lot of issues but he always gave 100 percent of what he had.

A DVD of one of the live shows has just hit stores. Did you get a chance to check it out yet and what's the highlight for you?

Like I said, seeing the concert all of these years later I was reminded how great the band was for that tour. We did a solid job of playing all of those different styles that Jim wrote in and getting all of the nuances the material required.