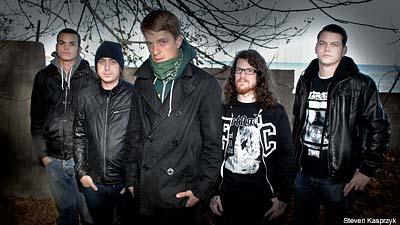 Don't roll your eyes at the mention of pop sensations Fall Out Boy on a metal blog, since the band's rhythm section has an incredibly metallic pedigree; drummer Andy Hurley and bassist Pete Wentz have hardcore backgrounds, having cut their fangs in bands like Racetraitor and Arma Angelus. Hurley is still immersed, feet first, in the HxCx scene -- especially with his new endeavor, the F--- City collective. It's a bunch of friends -- including Hurley, Misery Signals' bassist Kyle Johnson, guitarists Ryan Morgan and Stu Ross and ex-7 Angles, 7 Plagues memebr Matt Mixon -- living together in a three-floor house in Milwaukee, making music and rocking a clothing line, among other things. The housemates' first musical project is dubbed Burning Empires.

Hurley compared F--- City a bit to the Boston hardcore scene, where community was fostered and ultimately festered. "We work out of the house for both FC clothing and all the band sh--," Hurley told Noisecreep. "Ryan has been learning Pro Tools and getting really good, and he's recorded a few projects, including our seven-inch that is coming out soon. So everything is in house.

"Our best friend Kevin Herwig, who sings for Get Rad and was in Since by Man, prints all the FC s--- and we keep it at the house and ship it from here as well. Then there are just a million different musical projects going at all times. The goal is to just get as many ideas out there as possible, whether it be a s---y shirt idea or a few songs for a band that wouldn't fit Burning Empires or something else."

Hurley isn't afraid about scaring away teenybopper Fall Out Boy fans, either, with his side projects. "I definitely hope that FOB fans discover hardcore through Burning Empires or any of the FC projects," Hurley said. "With the www.fc666.com Web site, the hope is to talk about s--- that means something and goes somewhere, especially through the forum. The reason I got into hardcore was because it was about something, and the world that Fall Out Boy lives in isn't always about something important.

"That's not to say we haven't brought up things that need to be said, but not always in as direct of a way as I'd like. I'm an anarcho-primitivist and I'm really interested in engaging in dialogue about it and other things that need to change in this world. Hardcore has always tapped into the rage I have about things."