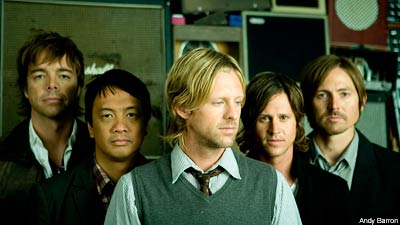 San Diego's Switchfoot had a time making their latest album (and Atlantic Records' debut), 'Hello Hurricane.' They talk about this labor of love at length in the following exclusive videos on Noisecreep, which consist of five chapters where the band opens up and discusses everything that went into the making of this hard-charging rock opus.

In chapter one, the band opens up about putting their souls into their record and how they had complete and new-found independence, having split from their prior record label and management, while building their own studio. Chapter two is where the band expounds on the difficulties of making the album without music business resources and the challenges of making the record and capturing an orchestral sound. Chapter three finds the band sorting through their own self-criticism, while chapter four is where they talk about turning the corner and how the album was oxygenated due to the way it will connect with people on the most base, human levels. Chapter five exposes the album title's significance.

Grab an umbrella and get ready to get soaked by a rock 'n' roll hurricane by watching these clips, which offer a candid peak into the heart of Switchfoot and what makes them tick.

'Hello Hurricane' is out tomorrow.

Filed Under: Switchfoot
Categories: Interviews
Comments
Leave A Comment
Back To Top